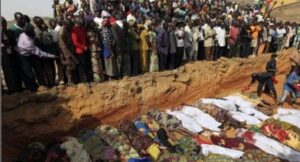 The media did their job by reporting on the horrific mosque attack in New Zealand last week where fifty were killed, but the ongoing mass slaughter of Christians does not fit the liberal media narrative. Persecution is at record levels – but we’d never know it. Over 300 Nigerian Christians were slain since last month alone, and the media remains silent.

The bias, discrimination, and numbers don’t lie. Democrats in control of the media should be ashamed of themselves.

The radical Islamic group, Boko Haram, is responsible for killing thousands of Christians and displacing countless more in northern Nigeria. Over two million people have been forced to leave their homes due to severe persecution.

In addition, the Muslim group known as the Fulani have also maimed or killed over 6,000 Christian women, children, and elderly in the last two years. Didn’t hear about that either? I wonder why?

The mainstream media, politicians, and world leaders took turns condemning the mosque attacks in New Zealand, and denouncing the violence there. And rightly so. It was front page news for days.

But now it’s up to us to condemn the irresponsible reporting and media malpractice silence surrounding the simultaneous massacre of scores of Christians by Muslim militants in Africa and the Middle East. Over one hundred twenty Christians were killed during the same three weeks in central Nigeria, using machetes and gunfire to slaughter men, women, and children.

They burned down over 140 houses, destroyed property, and spread terror. According to Breitbart News, The New York Times didn’t cover it at all.

Apparently, when assessing “all the news that’s fit to print,” the massacre of African Christians did not measure up. The same can be said for the Washington Post, the Chicago Tribune, the Detroit Free Press, the LA Times, and every other major paper in the United States. The news shows from the three major television channels did not mention the story, nor did CNN or MSNBC.”

There are several possible reasons for media silence, but none of them can be justified. Since it happens so frequently, Muslims killing Christians wouldn’t attract the viewers. But a white supremacist shooting up a mosque is right up the politically correct media’s alley of what is considered “newsworthy.”

I know, it’s repulsive to think this way.  But anti-Christian bias and bigotry has been rightly called “the last acceptable prejudice.” Who cares if Christians are offended? Talk about hate and hypocrisy.

There has been a dramatic rise in Christian persecution already in 2019, and we are just a few judicial appointments and elections away from it spreading to America. Our religious freedoms are already being threatened, including our speech.

According to Open Doors, seven of the top ten World Watch List countries are Islamic where the violence and murder is carried out by Muslims. It’s true they are also killing other Muslims, but Christians are the ones who are clearly the most targeted and persecuted religious group in the world. Hands down.

Other countries wanting to stamp out Christianity are Laos, Burma, and Vietnam, each making the top twenty list. The highest mover was China, where the greatest increase of persecution is taking place, and the management of religious affairs lies with the godless communist party.

Millions have escaped countries such as Nigeria, Syria and Iraq since 2015.

Barnabas Fund reports nearly 300 people killed in at least seven Christian villages across Mid Nigeria in February and March of this year, including brutal rapes and maiming with machetes. In a February 14 dawn attack on Karamai,

“41 died when some 300 gunmen engulfed the village, chanting “Allahu Akbar!” as they fired their guns and ransacked homes. Almost all the dead were women and children, apart from a few elderly and blind men who were unable to flee.”

Women and girls are on the front line of this violence! Not only are they deemed less valuable in some of these societies, but much hostility and persecution is due to their minority status. Among the abuses faced by women and girls are kidnapping and forced marriage, lawful beatings, rape, having acid thrown in their faces, domestic violence, and honor killings.

Where are those against racism when it comes to renouncing the genocide of black Christians in Africa? Do progressives and the media only care about what happens to liberal women in the United States?

Is this all too hard to hear? Well, step back and imagine having to go through it yourself – and thank God if you live in America where religious freedoms are still a protected right – for now. Pray for our brothers and sisters in Christ being persecuted around the world. ‘Please intervene, Lord!’

Real Hope in the Resurrection and Return of Christ
Anti-Christian Bias, Unequal Outcomes in ‘Equality Act’