Pope Francis recently signed a pact with Muslims in a possible push toward a one-world religion and declared that diversity of religions is God’s will. But wait. Doesn’t the Bible warn us about unifying with those who worship other gods and have contradictory beliefs on major teachings? God sent His Son to save sinners, but Allah had no son. Isn’t this a problem with anyone else?

There are many glaring, stark contrasts between the founders of Christianity and Islam as well as the doctrines themselves. Jesus taught love and forgiveness, and He also instructed His disciples to “pray for those who persecute you. (Matthew 5:44).” But the prophet Muhammad was a violent warrior who promoted conquest, had multiple wives, and killed Jews and Christians – referring to them as infidels and sworn enemies. Look it up.

Jesus was a sinless, spiritual leader who laid down His life to save mankind, said “Father, forgive them” to those that crucified Him’ Jesus never killed anyone. Muhammad too, was a spiritual leader, who became a political leader, a liar, and a violent military leader. Christ ruled by peace while Muhammad ruled largely by the sword. 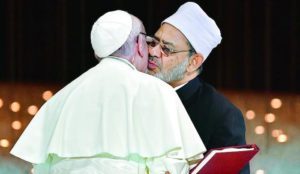 Nevertheless, a historic interfaith covenant was signed in the Middle East last week, and isn’t it interesting the U.S. mainstream media was practically silent about it? Sheikh Ahmed al-Tayeb, considered to be the most important imam in Sunni Islam, arrived at the signing ceremony with Roman Catholic Church leader Pope Francis “hand-in-hand in a symbol of interfaith brotherhood.”

The pope and the grand imam of al-Azhar signed what was referred to as “a historic declaration of fraternity, calling for peace between nations, religions and races, in front of a global audience of religious leaders from Christianity, Islam, Judaism and other faiths.”

Many gods and spirits exist, but if one religion is true, all the rest have to be false. Does the Bible have anything to say about this?

“…do not believe every spirit, but test the spirits to see whether they are from God, for many false prophets have gone out into the world; …and every spirit that does not confess Jesus is not from God. This is the spirit of the Antichrist;” (1 John 4:1-3)

Though there are some similarities, Islam is quite incompatible with the Bible as well as America, a society that values Judeo-Christian principles and religious freedom. Islam will accept no other religions, no competing economic or political views, and no legal system except Sharia Law which would outlaw Christianity.

And by the way, did you know Muslims elected to Congress demand to be sworn in on the Quran, not the Bible? So who or what are they swearing allegiance to? Many passages in Islamic holy books command and justify violence in the name of Allah. Let’s look at what the Quran has to say about other religions.

“The punishment of those who wage war against Allah and His messenger and strive to make mischief in the land is only this, that they should be murdered or crucified or their hands and their feet should be cut off on opposite sides or they should be imprisoned; (Quran 5:33)

“(Remember) when your Lord inspired the angels… “I will cast terror into the hearts of those who disbelieve (defy Allah). Therefore strike off their heads and strike off every fingertip of them” (Quran 8:12)

“And fight them until there is no fitnah [meaning disorder, unbelief] and until the religion, all of it, is for Allah. And if they cease – then indeed, Allah is Seeing of what they do”

Islam is a social, political and economic system (Sharia Law) that uses a false deity (Allah) to advance its agenda of control. The meaning of Islam is “submission,” and people must bow to Allah.

The God of the Bible, Jesus Christ said, “All authority has been given to me (Matthew 28:18).” Islam, however, teaches Jesus was only a prophet. They say He was not God and teach that Jesus did not sacrifice Himself for our sins and die on the cross, nor did He rise from the dead. These are core essentials of the Christian faith!

Muhammed claimed to be the last and greatest of all of God’s prophets, he had fifteen wives, and sanctioned the beating of wives (Sura 4:34). Muhammed was well known for spreading his new religion by force. Five years after his death, Muhammad’s followers captured Jerusalem and by 732 A.D. they went into Spain. Their aggression continued for hundreds of years until finally, resistance rose up via the Crusades which began in 1095.

In the document the Pope signed, the word “God” is used to identify both Allah and the God of Christianity. It contains much about peace which is good, but the problems go beyond that.

The agreement continued, referring to Muslims and Catholics as:

“We, who believe in God…call upon ourselves, upon the leaders of the world as well as the architects of international policy and world economy, to work strenuously to spread the culture of tolerance and of living together in peace;”

How can we unite with someone that doesn’t agree on who God is? The document is also saying erroneously it is the will of God that there are hundreds of different religions in the world and that they are all acceptable in His sight. No. Diversity of religions and false teachings are due to sin; it’s not God’s will.

Another thing the pope did was to declare the Sharia-governed United Arab Emirates the ‘homeland of tolerance.’ Just look at history and news reports and you’ll see this could not be further from the truth.

So, Pope Francis shook hands, kissed, and signed with El-Tayeb, an open advocate of sharia law. In fact, in a June 2016 television interview he stated,

“The penalty for an open apostate, departing from the community [Islam], is well stipulated in sharia. An apostate must be pressed upon to repent within a variable period of time or be killed.”

In December 2015, when questioned about why al-Azhar University had not yet issued a formal statement condemning ISIS as a genocidal terrorist organization (which would have given the group the status of kufr, or un-Islamic), Tayeb responded, “Al Azhar cannot accuse any [Muslim] of being a kafir [infidel] as long as he believes in Allah and the Last Day – even if he commits every atrocity … I cannot denounce ISIS as un-Islamic, but …they cause corruption on earth.”

Really? Is this someone we can trust to promote peace and human rights? A man to partner with?

Let’s go back to passages in the Quran calling for war against Christians and Jews, where in Surah 9 and 29 it states:

“Fight against such of those who have been given the Scripture [People of the Book] who do not believe in Allah or in the Last Day and who forbid not that which Allah has forbidden by His Messenger, and follow [adopt] not the religion of truth from those who were given the Scripture.”

Clearly, Islam and Christianity are mutually exclusive. Both claim to be the only true way to God, but both cannot be right. There is no atonement in Islam, no forgiveness, no savior, and no assurance of eternal life. Pope Francis also failed to mention the thousands of Christians dying under Islamic persecution in the Middle East, Africa, Indonesia, and other parts of Asia.

Former Muslim, Elijah Abraham, is an expert on Islam and as an evangelist, he travels worldwide to train pastors on apologetics and how to witness to Muslims. He states:

Islam is advancing in the West with an evil agenda to convert Westerners and especially Americans to Islam and dominate the world. If that happens, the biggest loser will be the church of Jesus Christ in the West because of its loss of its religious liberty and freedom of speech.

Nowhere in the Bible does God encourage joining with other religions. On the contrary, He warns against it, punished the people of Israel for allowing the slightest pagan influence in their camp, and teaches about being set apart.

Pope Francis didn’t deny terrorism, but said such “tragic realities are the consequence of a deviation from religious teachings.” Some say terrorism is a result of taking Islamic teachings literally and seriously.

Speaking of deviations, let’s discuss a few doctrines that Roman Catholics and Protestants disagree on including the fact Muslims worship Allah, not Jesus.

If need be, just read paragraph 841 of the Catholic Church Catechism:

“The plan of salvation also includes those who acknowledge the Creator, in the first place amongst whom are the Muslims. These profess to hold the faith of Abraham, and together with us they adore the one, merciful God, mankind’s judge on the last day.”

They refuse to put their faith in Jesus alone for salvation, but Muslims are saved “together with us.” Not according to the Bible. Has there been a plan to form a one-world religion all along?

While there have been many attempts in recent years to find common ground between the two religions, the fact is that stark differences remain.

It is misguided to focus on a few common teachings without considering the differences in major doctrines that are diametrically opposed to one another. This is not to say we shouldn’t evangelize people of other faiths, but when it comes to “uniting,” Christians are often the first to compromise, and it’s often biblical doctrine that suffers.

All through the New Testament, we read about righteousness and salvation by faith in Christ alone; that we are saved by the grace of God through faith (Eph. 2:8-9). Paul taught that because by the works of the Law no flesh will be justified in His sight,” (Romans 3:20), and “For we maintain that a man is justified by faith apart from works of the Law (Rom. 3:28).”

Our real enemy is Satan, our struggle is a spiritual one, and we need to stand strong on the word of God. Lord, help us to be more discerning! We know that the powerful and world elites are pushing uniformity and a one world religion, but it’s stunning to see the top world leaders from Catholicism and Islam make such a dramatic display, clearly a sign we’re drawing closer to the end.

Interesting times. Be on the alert, friends; watch and pray!

Is Catholicism a False Religion? –  Got Questions

Corruption in the Catholic Church – video

Interviews with Former Muslim, Elijah Abraham – on Stand Up for the Truth

What are the differences between Catholics and Protestants? – video

Who Was Margaret Sanger, Why Should We Care?
Who Do You Say Jesus Is? Matthew 16 Sermon & Notes