Winston Churchill once said “The truth is incontrovertible. Malice may attack it. Ignorance may deride it, but in the end, there it is.”

Plenty of American history has been rewritten and is now being parroted throughout academia. Many have also tried editing world history as well, particularly when it comes to Israel and the Jewish people.

May 14 of this year marks the seventieth anniversary of Israel becoming a state, and it should be noted the nation was not “created” in 1948. Israel was miraculously re-gathered according to God’s will and Bible prophecy. Over five million Jews returned to Israel, and as predicted, the remnant was restored (Isaiah 11:11-12; Ezekiel 37:21-22; 38:8). 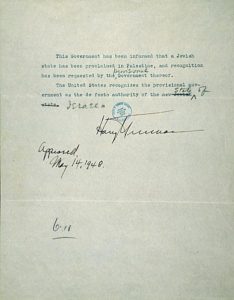 The government of Israel proclaimed the new state on May 14, 1948 when at midnight, British rule over Palestine lapsed, and minutes later, White House spokesman Charlie Ross announced U.S. recognition. God chose to use America in its rebirth and President Harry Truman signed on to acknowledge the new State of Israel.

Never before in history has a nation or people been dispersed throughout the world and then centuries later, returned to their homeland from the north, south, east, and west (Isaiah 43:5-6).

But what about America?

The Bible teaches that those who bless Israel will be blessed (Genesis 12:3). It was Truman in 1948, but few recall what Richard Nixon did in 1973. 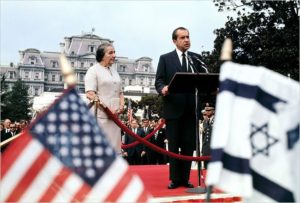 Israel was vastly outnumbered in manpower and weaponry during the fourth Arab-Israeli war when Egypt, Syria, Iraq, and Jordan carried out a surprise attack on Israel while Jews were observing Yom Kippur.

There was talk of surrender days into the war as Israeli Prime Minister Golda Meir faced insurmountable odds. In desperation, she called the White House at 3 AM on October 6, 1973, and the Nixon administration acted decisively sending 22,000 tons of jets, tanks, and ammunition by air and by sea to Israel. Shortly afterward, Israel overcame its enemies once again and the war came to an end.

What about President Trump? Between Nikki Haley standing up to the United Nations and the Trump White House reestablishing a strong relationship with Benjamin Netanyahu and our greatest ally, this is the most pro-Israel administration in decades. New US Secretary of State Mike Pompeo recently declared the United States stands with Israel against Iran, so we’ll see how it all plays out.

You may argue that Donald Trump is not a godly Christian leader so how could this be part of God’s plan? In Isaiah 45, a pagan king, Cyrus, was raised up to stand for Israel and God blessed the nation. Trump may or may not be a modern-day Cyrus, but the point is for us to pray for God’s will to be done and also – to keep our eyes on Israel.

No nation or world leader comes into power apart from God causing or allowing it to happen. The book of Daniel states:

Praise be to the name of God for ever and ever; wisdom and power are his. He changes times and seasons; he deposes kings and raises up others. He gives wisdom to the wise and knowledge to the discerning. He reveals deep and hidden things (Daniel 2:20-22).

“The king’s heart is like channels of water in the hand of the LORD; He turns it wherever He wishes. There is no wisdom and no understanding and no counsel against the LORD (Proverbs 21:1, 30).” 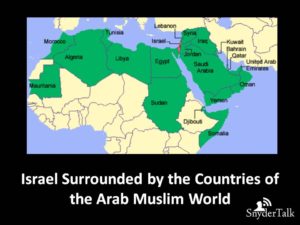 Israel controls less than one percent of all Middle Eastern territory and is surrounded by twenty-two hostile Arab and Islamic dictatorships. In fact, Arab nations have approximately 640 times more land than Israel, the only democracy in the region.

The majority of Arabs and Muslims are enemies of Israel and want the nation destroyed. They don’t think Israel has a right to exist.

This is the key to the entire Middle East conflict. Author and talk show host Dennis Prager adds:

“Those who deny this and ascribe the conflict to other reasons, such as ‘Israeli occupation,’ ‘Jewish settlements,’ a ‘cycle of violence,’ ‘the Zionist lobby’ and the like, do so despite the fact that Israel’s enemies regularly announce the reason for the conflict.”

They openly want the Jewish state annihilated. A coalition of nations is rising up against Israel just as Scripture predicts, and most are Muslim nations. The Lord seems to be setting the stage for His return like never before.

God’s faithfulness throughout the Bible encourages us because we know we can trust that He will make good on the remaining prophecies about Israel, the return of Christ, and the end times.

“I have lived, Sir, a long time and the longer I live, the more convincing proofs I see of this truth − that God governs in the affairs of men. And if a sparrow cannot fall to the ground without His notice, is it probable that an empire can rise without His aid? We have been assured, Sir, in the sacred writings that ‘except the Lord build the house, they labor in vain that build it.’”

Most of us would agree God is no longer building ‘America’s house’ so be prayerful and watchful, my friend. I’m not sure who said it first, but things are not falling apart around the world; they are falling into place. Regarding upcoming world events, Jesus and the Bible will again be proven accurate, reliable, and true.

Christians Now Targets of Choice
Our Mother Who Art In Heaven, Hallowed Be Beyonce?