You may have heard Grace Cathedral, an Episcopal church in San Francisco, held what was called a ‘Beyoncé mass’ last week, and at an evening service where fifty people typically attend, about 900 turned out to hear music by Beyoncé featured.

People are free to worship however they want, but doing this at a church was both confusing and controversial. The Bible teaches Christians to be set apart from the world, not to blend in. And Jesus said if we love the things of this world, God the Father’s love is not in us (1 John 2:15).

The Beyoncé mass was inspired by a guest Reverend, Yolanda Norton, and by an actual class she teaches at San Francisco Theological Seminary: ‘Beyoncé and the Hebrew Bible.’

Some might argue, ‘It’s just entertainment,’ right? The question is do secular entertainment and unbiblical themes belong in a place of Christian worship where the focus should be to exalt the name of Jesus?

Many have detailed Beyoncé’s occult influences, offensive and often graphic song lyrics, her sexually charged, R-Rated performances, and past blasphemy. She also admits to being possessed by a demonic spirit she affectionately refers to as “Sasha Fierce.” In an interview with Extra, Beyonce once said, “I think Sasha Fierce is part of me.”

Pastor Joe Schimmel of Good Fight Ministries did an expose on Beyonce and her 2013 Super Bowl halftime show when she mimicked the Hindu goddess Kali Kali – often associated with darkness of death – displayed the devil’s triangle, goat-headed Baphomet, and flashed the Illuminati symbol. You can actually see a transformation during that Super Bowl performance as her face distorts, appearing “fierce” and even masculine at times.

The spirituality behind contemporary feminism often comes in the form of goddess worship, and the fact many have a desire to overthrow the patriarchal structure in society. It is rebellion against God as “Father.”

During the actual Beyoncé mass, an alternate, feminist perversion of the Lord’s Prayer was printed in the program for attendees to read out loud.

Our Mother, who is in heaven and within us, We call upon your names.

Your wisdom come. Your will be done. In all the spaces in which you dwell.

Give us each day sustenance and perseverance. Remind us of our limits as we give grace to the limits of others.

Separate us from the temptation of empire. But deliver us into your community.

For you are the dwelling place within us, the empowerment around us, and the celebration among us, now and forever.

One idea behind this is liberation; for women to regain their natural power and to have authority over men. In order to accomplish this dominance, they must invoke certain spirits to help destroy the Judeo-Christian religion. Some New Age proponents teach that Wicca, goddess worship, paganism, and witchcraft are all centered on a religion involving the mystery and sexuality of the female.

During the performance mass, many people said their favorite part was a rendition of her song “Freedom.” Attendees cheered during a ‘call and response’ about freedom from homophobia, racism, patriarchy, sexism, classism, and transphobia.

It was noted that the church in the past has not treated women of color fairly. Agreed. And slavery, too, was reprehensible. So today, how does this help people move on and learn from past injustices? They also emphasized liberal involvement in public life and government. 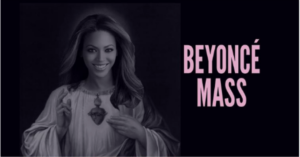 Fans were warned not everyone would be supportive of the mass, and were told to remind people “God is in all the world and that Beyoncé is made in God’s image.”

Yes, every human being is created in the image of God, but the truth is God is not in everything. He does not indwell people who hate Him. His presence is not in a rock, tree, animal, etc. The Creator indwells His children, but God does not force Himself on anybody.

Referring to morality, Reverend Jude Harmon said “conservative Christians see a high wall separating the Church from the world; progressive Christians do not.” Grace Cathedral identifies as progressive and has a web-page noting that it is proud of its LGBT advocacy. Of course they are.

But is ‘Queen Bey’ an appropriate role model for African American women, particularly for women who do seek to follow the Bible’s teachings on holiness, morality, sanctification, and truth? These are not bad people; they’re just wrong, and ignorant about promoting evil. And this is another gospel.

Churches across the country have tried using worldly ideas to draw unbelievers to their services, but what often happens is they end up entertaining the goats instead of feeding the sheep. The result is compromise.

When you use worldly means to give people what they want rather than what they need spiritually, please call it something else because you’re not glorifying Jesus and worshiping the one true God.

The God of Israel, America, and History
What If A Conservative Said That?