By David Fiorazo on May 29, 2018 in American History, Christianity in America, David’s Blog, Government Corruption, Liberalism, Religious Freedom, The Cost of Our Silence

Vice President Mike Pence made a surprise appearance at the Watchmen on the Wall conference in our nation’s capital last week and implored pastors to share the good news of Jesus Christ. God bless him. But it’s what he said about the Johnson Amendment that we should peak our curiosity.

I don’t remember any president or vice president talking so openly and frequently about the Christian faith. Mike Pence boldly implored the people:

“Keep preaching the good news. Keep preaching in season and out of season as the Bible says. Always be prepared to give a reason for the hope that you have,” (2 Tim. 4:1-2, 1 Peter 3:15)

Pence also received a standing ovation when he emphasized the fact President Trump is the most pro-life president in American history. 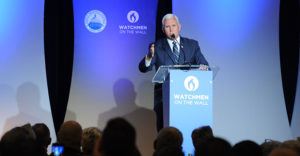 Because the Trump administration is strong on religious liberty, it makes sense he mentioned the unconstitutional Johnson Amendment, which restricts religious leaders when it comes to talking about politics.

“We are going to fight until we fully repeal the Johnson Amendment from the Internal Revenue Code, but it will no longer be enforced under this administration,”

No longer enforced. What a statement! So, what exactly is the Johnson Amendment and is there really an agenda to silence Christians?

The Johnson Amendment was passed in 1954 by Congress as an amendment to section 501(c)(3) of the federal tax code… stating that entities that are exempt from federal income tax (such as non-profit groups) cannot “participate in, or intervene in (including the publishing or distributing of statements) any political campaign on behalf of – or in opposition to – any candidate for public office.”

This flawed law paved the way for the growing censorship of conservatives, particularly when it comes to restrictions on what can be said during church services.

Then Texas Democrat, Lyndon B. Johnson, was a powerful liberal running for reelection as Senator, but two [conservative] tax-exempt groups were opposing him and passing out literature during the campaigns. He complained to the IRS but found what they were doing was perfectly legal, so he sought other options to fight them.

Johnson shrewdly appeared on the Senate floor on July 2, 1954, and offered his amendment to a pending, massive, tax code overhaul bill. Records indicate an absence of committee hearings on the bill. No legislative analysis took place to examine the effect the bill would have, particularly on churches and religious organizations.

The amendment was simply created to protect Johnson. Why this horrendous law has not been repealed yet is mind-boggling.

Sadly, due to confusion, hype, and misinformation about the Johnson Amendment, religious leaders in America have been unnecessarily self-censoring for decades! The Left uses it to bully Christian pastors and groups with threats of losing their nonprofit status, and they wrongly insist religious leaders must not speak about the Bible as it relates to political and social issues – which are moral issues!

As a result, freedom of speech and the free exercise of religion have been trampled on. A huge amount of people now think the Bible (church) has nothing to say about politics (state) and that it’s illegal for pastors to address candidates and where they stand in light of Scripture or church doctrines.

We need to understand something here: the IRS has never fined a pastor or church. In fact, every year thousands of Christian leaders across the country purposely talk about politics during church services on what is called Pulpit Freedom Sunday.

This of course won’t stop those bent on removing Christian influence from society. President Ronald Reagan once said:

“The Constitution was never meant to prevent people from praying. Its declared purpose was to protect their freedom to pray.”

The truth is every time a law is passed, someone’s morality is legislated. Government affects every one of us. Man’s greatest problem is sin and our greatest need is forgiveness, and have every right to speak the truth in love.

The annual Watchman on the Wall conference hosted by the Family Research Council operates under the belief that problems facing America and this world ultimately require a spiritual solution. This could not be truer because the good news of Jesus Christ is the power of God to salvation.

If our hope is in people, politics, or possessions, we will eventually wind up empty. If however, we place our trust in the only One who can forgive and save us, we will have an unshakable hope and a secure future inheritance.

Are we willing to speak the truth to this generation including what the Bible teaches about sin, repentance, and salvation through faith in Jesus?

The IRS is not a true threat nor is government the ultimate authority! Quite frankly, if a pastor is worried about his non-profit status or being fined, then who is he serving, Caesar or Christ?

For the rest of us, real Christianity cannot be confined behind the walls of any church.