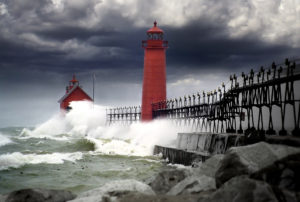 Perhaps the biggest casualty in the ongoing war against God and truth is this generation of young people. Meanings of words have been changed, history rewritten, and political correctness rules the day. Evil is now called good, and good people are falling for the deception.

The devil’s alternative credo often has a few carefully chosen elements of truth in the mix – but always diluted and thoroughly blended with falsehoods, contradictions, misinterpretations, distortions, and every other imaginable perversion of reality. Add it all up and the bottom line is a big lie.

This battle over biblical morality – not only in the public square but in the church as well – continues to intensify and once again, Christians find ourselves with our backs up against the wall playing defense.

Our ultimate struggle is not against flesh and blood, and the enemy has gained much ground. Satan’s minions are working overtime. Though our ship is badly damaged, the Bible teaches that our hope in Christ is an anchor of the soul (Hebrews 6:19), and our worldview is the linchpin that affects our faith and how we live our lives.

There is plenty of division over truth in our country and world today, so one question is whose teaching do we believe and follow, and, which one is true? Jesus made some exclusive claims about which we cannot be neutral. Many of us struggle with defining our Christian worldview and much depends on what we believe regarding the deity of Christ. This starting point affects everything. The Apostle Paul wrote to the Colossians:

For by Him all things were created, both in the heavens and on earth, visible and invisible, whether thrones or dominions or rulers or authorities − all things have been created through Him and for Him. He is before all things, and in Him all things hold together. Colossians 1:16-17

We profess to know the truth of Scripture and yet too many people seem to be less than certain about the very nature and origins of humanity. Satan is the father of lies and author of confusion, and in this darkness we find ourselves debating history; not only the creation of the universe, but whether or not God even exists.

Many believers agree Jesus is God forever, but the things of this world pull us away from our pursuit of His will. As a result, we choose to focus on the here and now which is part of the problem. Due to our lack of priorities and indifference about the culture war, we have allowed godlessness and relativism to advance.

Barna Research surveyed Americans last year on moral absolutes and found only 35 percent of people believe moral truth is absolute. The conclusion? “Christian morality is being ushered out of American social structures and off the cultural mainstage,” and this results in the broader culture trying to fill the void.

A few key findings include: 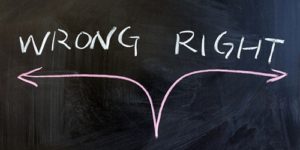 This further proves the degree to which Americans pledge allegiance to the “morality of self-fulfillment,” a new moral code that has all but replaced Christianity as the culture’s norm. The greatest good is “finding yourself” and living life in pursuit of pleasure. This is not what the Bible teaches and yet two-thirds of Christians are living for today rather than seeking first the kingdom of God and His righteousness (Matthew 6:33).

Most of us are concerned about immorality in America, but the church has generally not equipped people to deal with the onslaught of evil and the growing tide of secularism. Since so many Christians are on a happiness quest instead of seeking and living the truth, why should the world be any different?

Religion and culture expert Dr. Alex McFarland declares Jesus is the fact on whom all other facts rest. In the context of creation and the deity of Jesus Christ, he stated:

A powerful Being initiated a beginning and intentionally caused the world around us. The cosmos has purpose and is not all that there is. If the subject matter of John 1 corresponds to reality (and the case for the Bible’s absolute trustworthiness is compelling), then atheism, secularism, moral relativism, and politically correct pluralism are all false. God is real, life has purpose, and yes, humans are accountable.

Therefore, if Jesus did indeed come from heaven, is divine, and shows us the way to God, everything changes. A culture that has tethered itself to godlessness is investing itself in that which is false.

The Left has worked nonstop to change America in part by chipping away at its Christian foundation, and infiltrating these seven areas: government, arts and entertainment, education, media, business, religion, and the family. I’m not saying we aren’t concerned about cultural decay; I’m saying it doesn’t bother us as much as it used to or we’d be living much differently.

Research also indicates the sad reality that only about half of professing evangelical Christians think abortion and sex outside of traditional marriage are sins. The biblical illiteracy of Christians in all denominations is alarming.

Thanks in part to building programs and relevant services, numbers may be increasing at larger churches, but Christian maturity and discipleship are suffering. The bigger the church, the more difficult it gets to follow up with people individually, provide a solid foundation to build upon, and promote accountability.

With more churches in the U.S. (over 300,000) than convenience stores, gas stations, and motels combined, the problem in America is not that we have too few churches or members. We have too few disciples and too many pretenders “professing” Christianity.

Another survey suggests only 3 percent of those claiming some form of the Christian religion “have surrendered control of their life to God, submitted to His will for their life, and devoted themselves to loving and serving God and other people.” Three percent.

We live in such touchy-feely, emotion-driven times that it is easy to understand why people are avoiding hard facts and absolutes. Many in our culture overemphasize tolerance, empathy, and compassion, and esteem these as the highest of values. To be clear, these are not bad things, but why should they be higher in value than truth, doctrine, and whether God exists?

The Creator, who has revealed Himself in His Word, is both the standard and authority for morals. From God’s nature comes pure good that serves as the straight line by which all crooked lines can be corrected.

If our nation continues down this road where truth is no longer an objective reality, there’s no telling where we’ll end up. One thing is certain − it won’t be good. It’s okay to be disappointed in the direction of the church and our country, but don’t be surprised by cultural shifts, forgotten history, and surveys

Christians have a secure, unchanging foundation and on this stable ground we can believe God is the eternal and ultimate authority. Objective truth exists because we have His Word on it. Thankfully, we trust in an unchanging, unshakable God! Though times will get darker, we know He is still working and we can be confident that truth will ultimately prevail.

Part of this is an excerpt from Redefining Truth by David Fiorazo.

Seduced by Scientology: Deceptions of One Man’s Fiction
Eight Key Concerns for Christians in 2018