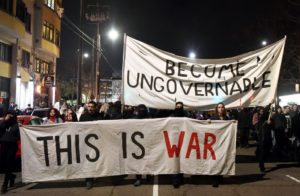 Can you really call it a war when only one side seems to be doing most of the fighting? The left are aggressively pushing their agenda across America – immorality, lawlessness, and anything opposed to biblical Christianity – and the troops are advancing through every major institution. This obviously includes academia.

They’ve taken control of the media, corporate America, the entertainment industry, the education system, the culture, the courts, and government. But wait, Donald Trump just became president of the United States and it is nearly driving some of them insane. Hollywood in particular is becoming unhinged.

Madonna publicly admits she has thought about “blowing up the White House.” Actress Lea DeLaria (Orange is the New Black) said she wanted to “pick up a baseball bat and take out every [expletive] Republican and Independent I see.” Bruce Springsteen told an Australian audience he is now embarrassed to be an American. Nordstrom stores drop Ivanka Trump’s clothing line, and the list goes on.

Just days ago on The View, Whoopi Goldberg lamented America’s new president and criticized the administration’s policies on women, Planned Parenthood, the media, and refugees, and asked the audience, “are these values really much different than the Taliban’s?” Oh, and Robert De Niro said about Trump, “We have to bully him back.”

And decades ago, the left conquered higher education by gaining control of most every college and university. Tragically, too many of us are just now seeing the rotten fruit academia has been producing for years.

Cue the manufactured outrage at California University in Berkeley, CA.

Milo Yiannopoulos, an editor for Breitbart News, was scheduled to speak to conservative students at Cal Berkeley Wednesday night when radical left wing students and George Soros-funded groups organized a protest including hateful rhetoric, rioting, setting vehicles on fire, and throwing paint and Molotov cocktails at the building the speaker was in.

Cal students along with paid protesters carried signs against homophobic attitudes toward gays and against Trump’s refugee policies and get this: telling an open homosexual and legal immigrant he is not welcome at their university! Some shouted he has no right to speak here, and hatred is not welcome, blah, blah, blah.

In a press release, the rioters claimed Milo is a “tool of Trump’s fascist government,” and, here it is: “has no right to speak at Cal or anywhere else!” (Emphasis mine)

Leftists and progressives claim to be beacons of reason, tolerance, and “love,” but their actions prove they are hypocritical liars. The public only buys it because Hollywood and the media are on the side of lawlessness and have cornered the propaganda market. They defend the blatant Saul Alinsky tactics implemented by these agitators.

Alinksy dedicated his book, Rules for Radicals, to Satan (“…the very first radical known to man who rebelled against the establishment and did it so effectively that he at least won his own kingdom — Lucifer.”), and it has been the playbook for the Left. He provided marching orders that decades of loyal disciples across the country as well as in the Democratic Party today have used to gain power. A few goals are to destroy the American system of government, free markets, and the Judeo-Christian ethic the nation was established upon.

I co-host a radio program called Stand Up for the Truth, and host Mike LeMay shared his concerns on Thursday’s program:

We must fact this fact. American public education has become a breeding ground for Marxist Humanism. Today’s youth have been programmed to hate God, the Bible, truth, and anyone who thinks differently than they do.

Has one Democratic politician spoken up and condemned this violence?  No, and in fact, Obama has encouraged it, even up through yesterday saying he is “heartened” by the pushback against Trump. Have they condemned this treatment of a homosexual and an immigrant at Berkeley?  No. Because the progressive left in this nation is the greatest example of bigotry and hypocrisy you will find anywhere.

Remember all the protests and arrests and riots and police activity and violence right after Obama was elected? I don’t either.

At Cal however, the crowd even threw rocks and fireworks at police officers and damaged several buildings in downtown Berkeley. Ironically, they threw stuff and smashed windows of the Martin Luther King Jr. Student Union building. (Can’t snowflakes be called ‘racists’ for doing that?)

The mob also attacked various Trump supporters who were there including:

What did the university do? They blamed the violence on outsiders and due to their policy, no arrests were made and campus security stood back and watched.

America is reaping the seeds we have sown in public education and pop culture for the past fifty years! And to be honest, I don’t blame the kids. (How about parents, pastors, teachers, coaches, and youth leaders?) This is the fruit of our silence as well as the extreme lack of resistance to the hostile takeover of our culture and country.

“No one’s safety is at risk from different opinions; No one’s physical safety is endangered by political ideas from a speaker on campus, but universities have sort of allowed this stuff to happen, and even in some cases, encouraged it.” And, “For 30 years, the left has been able to bully people into silence by name calling…”

The Daily Caller been reported that UC Berkeley received $370 million in federal funding last year. What? Universities like this across America get extra tax money from all of us to further the liberal and progressive causes? Well, our tweeting president caught wind of this and sent out the following:

“If U.C. Berkeley does not allow free speech and practices violence on innocent people with a different point of view — NO FEDERAL FUNDS?”

That is an excellent idea which I hope the new administration purses. Then they can save taxpayers even more money by dismantling the U.S. Department of Education, the EPA, and by de-funding Planned Parenthood for starters.

There are those who call for civility and unity in America. I get it. But these calls are either naive or disingenuous. It is almost always conservatives, Republicans, and Christians who end up compromising in our society. The bar has slid way to the left. The parallel is not unlike those who are committed practitioners of radical Islam; you cannot coexist with those whose goal is to either force you into submission, make you pay high taxes and fines, or to kill you.

Liberals have been emboldened and would rather shut down the conversation – or shut you down – than allow conservative or Christian values and ideas to be considered or lived out.

It was Joseph Stalin who reportedly once stated:

“Ideas are more powerful than guns. We would not allow our enemies to have guns, why should we let them have ideas.”

Brooks is a Schwartz senior fellow at the New America Foundation, which is funded by billionaire George Soros’s Open Society Foundations. She served from 2009-2011 as Counselor to the Under Secretary of Defense for Policy and served as a senior adviser at Obama’s State Department. In an apparent effort to make a case against Trump, Brooks questions his mental stability saying, “has made it all too clear: Yes, he is as crazy as everyone feared.”

Militant liberal, actress Sarah Silverman also called for a military coup against the president, tweeting a list of moves Trump made in his first days in office to 9.8 million followers:

WAKE UP & JOIN THE RESISTANCE. ONCE THE MILITARY IS W US, FASCISTS GET OVERTHROWN. MAD KING & HIS HANDLERS GO BYE BYE

At the leftist-funded “Women’s March” a few weeks back, professing Christian, Ashley Judd went on a profanity-laced feminist rant on behalf of the new “nasty woman” movement. She likened Trump to Hitler a few times, ranted about women’s menstrual cycles, and raved about how women’s private parts are for pleasure rather than babies. Scarlet Johansson complained about having to use Planned Parenthood with when she was 15 years old.

Finally, the media would never mention this, but a main organizer of the event, Linda Sarsour, is a Muslim who wants Sharia Law in America. She is a Palestinian-American activist, executive director of the Arab American Association of New York, and an Obama White House “Champion of Change.”

Just like the Occupy movement, these protests stem from people’s warped worldview and rebellion against God the Creator of all life, also known as God the Father. Many on the left have an insatiable disdain for Christianity, America, capitalism, conservatives, patriotism, Republicans, Israel, and most recently, Donald Trump.

In her article, “The War On Sanity,” Jennifer Hartline describes the dilemma well:

In the new civil war… There is no objective reality based on observable, physical or natural law. There’s only the tyranny of feelings. And you are not permitted to disagree.

The world is not ending because Trump is president, and every citizen has the freedom to speak up, vote, and resist peacefully and politically without it leading to violence. I’m just not so sure the far left can restrain themselves any longer, but I could be wrong.

Don’t look now, but many on the far left believe we are in a civil war, and they’re taking it seriously.

Most of these poor souls don’t realize it yet, but they need the hope, truth, and salvation of Jesus Christ. Pray for them, they’re lost; and pray for the new administration.

First of all, then, I urge that entreaties and prayers, petitions and thanksgivings, be made on behalf of all men, for kings and all who are in authority, so that we may lead a tranquil and quiet life in all godliness and dignity. This is good and acceptable in the sight of God our Savior, who desires all men to be saved and to come to the knowledge of the truth. 1 Timothy 2:1-4

*Photos from this site: Breitbart News

Abortion Hurts Us All, Especially Women – Part 2, The Anguish of Abortion
Radicals Taking Down America: Is The Left Winning?

One Response to Berkeley Reflects America as Chaos Drives Politics