By David Fiorazo on November 9, 2016 in Christianity in America, Media Bias, Religious Freedom 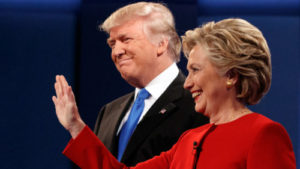 I believe it’s safe to say God intervened in this presidential election. How else can you explain what happened? We cannot however, claim to understand what God has in mind.

Note: in February, I shared my thoughts during the primaries on why I believe Christian conservatives did not support Trump at the time.

But now, the bitter, divisive election is over and the American media sure put up a good fight over the last several months. In fact, 91 percent of the media coverage on Donald Trump was negative. Fortunately, the people decided the outcome and chose not to believe the liberal media which intentionally gave the impression Trump was down for the count and Clinton would coast through election night to her acceptance speech while the crowds cheered.

Not exactly how it played out. It would seem insane to nominate two of the worst potential candidates with the highest negatives in election history to run for president, but we did just that!

The 2016 election cycle was bizarre, historic, and often hard to watch, but Washington outsider, Donald Trump was chosen by the American people to be the 45th president of the United States.

That number 45 is interesting. According to Bible prophecy in Isaiah 45, God anointed and raised up a pagan king, Cyrus, to stand for Israel and work on behalf of His people. I am not necessarily saying Trump is a modern day Cyrus, but God will use whomever He will to accomplish His purposes.

In the book of Daniel, the Scripture reads:

“Praise be to the name of God for ever and ever; wisdom and power are his. He changes times and seasons; He removes kings and raises up others. He gives wisdom to the wise and knowledge to the discerning. He reveals hidden things…” Daniel 2:20-22

If we really do believe God and know He is sovereign over all events and circumstances, we should ask for wisdom for the days ahead. And please don’t relax and think the work is done and we’ll be fine for four years. My main concern after this election is that Christians and conservatives will get comfortable or complacent.

The truth is God has given us a bit more time to repent, revive, and return to being about the Lord’s business.

Even though the election is over, there are many uncertainties still ahead for America, the Christian church, and our freedoms. We know however, that we can trust a known and faithful God with an unknown future.

We also know enemies of God will not relent on their evil agendas and true Christians must not rest. The Left has made tremendous progress in the last eight years under the leadership of President Obama, and much damage has been done to the character, moral fiber, and foundation of America.

The nation has been fundamentally transformed into a nation tolerant of sin and accepting of radical changes including the advancement of the LGBT agenda, the weakening of the American family, economy, and military.

The Obama administration has not been a strong supporter of Israel and even tried impacting their election last year. The media there did not give Netanyahu a chance to win reelection and had him down six points in the polls, but we all know how that turned out. Scripture teaches that God will either bless or judge nations for their treatment of His people.

The concerns Mr. Trump and his administration will be facing are daunting and numerous:

The national debt which Obama has more than doubled since taking office, the threat of ISIS and Islamic terrorism, the lack of respect world leaders now have for America including Russia and China, and the awful Iran nuclear deal practically insuring an attack on Israel.

A record number of Americans are on welfare and an unprecedented 94 million are not even in the workforce. The current president has done his best to divide the country along racial, religious, and political lines, healthcare costs have skyrocketed, and religious freedoms have been under attack as never before.

God will either have mercy on us by delaying His judgment or He will allow us to continue following the path of the lukewarm Laodicean Church of Revelation 3. For now, let’s not take for granted the short time and freedom we have in Christ and country. This election should remind us that we need to wake up and speak up, taking a stand for godliness and righteousness.

Though we can’t be certain if God has been working in Donald Trump’s heart, we do know Vice President Elect, Mike Pence is a godly man. There are pastors and other people of faith in his circle of influence so we’ll see what happens. Let’s pray and expect the best.

Will Trump make good on his promises? Will the Republican majority do what the people elected them to do? No one knows for sure.

But no matter what happened on election night or no matter what will happen in the weeks and months ahead, we know God either causes or allows leaders to be put in place.

I have lived, Sir, a long time and the longer I live, the more convincing proofs I see of this truth — that God governs in the affairs of men. And if a sparrow cannot fall to the ground without his notice, is it probable that an empire can rise without his aid? We have been assured, Sir, in the sacred writings that “except the Lord build they labor in vain that build it…”

Donald Trump had to plenty to overcome such as his own flaws and habits, years of baggage, strong, viable candidates such as Carson, Cruz, Rubio, Walker, Paul, Bush, Fiorina, Santorum, and others. He bested the Clinton machine and a complicit media that campaigned against him, George Soros’ money, manufactured protests, and skewed polls, the “Never Trump” camp, as well as biased and dishonest debate moderators. The odds seemed insurmountable.

It had to be God.

Elections however, do not change our calling and purpose in Christ. So, since these are the last days, it’s up to us to have a renewed sense of urgency and watch, work, hope and pray as never before.