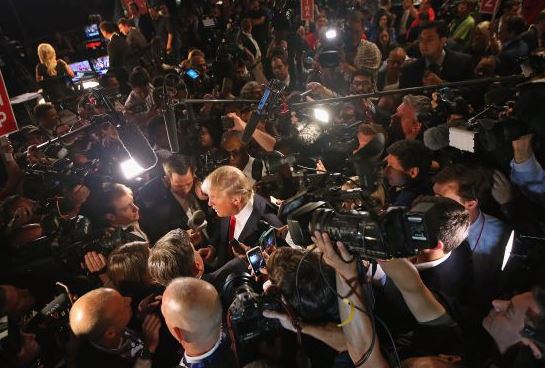 Americans are fed up and tired of being insulted by condescending elites on the Left. It is no surprise trust in the mainstream media is at all-time lows with less than 30 percent of people buying what reporters are selling as “news.”

We’re on to them; the numbers do not lie, and the recent presidential election results should reinforce how the liberal media’s (indirect campaign) bias against Donald Trump and support for Hillary Clinton backfired.

A new Media Research Center (MRC) poll shows a high number of voters rejected Democratic media bias and that by a 3-to-1 margin, the public saw media bias favoring Clinton.

Here are a few of the findings:

In 30 years, I’ve never seen anything like this. The media are in full panic mode because the American people rejected their leftist agenda — and them… There is an institutional bias at major media networks that must be repaired and I am highly skeptical that news executives are interested or capable of undertaking this responsibility.

When major news outlets appear to be admitting the obvious, you know it has to be bad! This from the failing New York Times:

After such an erratic and unpredictable election, there are inevitable questions about Donald Trump’s sheer unconventionality and did that lead us and other news outlets to underestimate his support among American voters?

Just days after the election, Joe Concha at The Hill reviewed the NYT’s website to see if there was any evidence that they learned a lesson and wrote:

“… When it’s impossible to find one headline out of 19 on the [New York Times‘] homepage that can be deemed positive [about Trump], that shows without ambiguity the Times has no plans to be remotely balanced any time soon.”

We shouldn’t expect the media to get back to the basics and do what America’s founders created it to do because the general public knows it is too far gone at this point. They have given in to ideology over truth. Most of us already know the answers to the following questions, but they still must be asked:

Do the elite media monitor the power of the United States government regardless of whether there is a Republican or Democrat in the White House?

Do they report on subjects such as abortion, sanctuary cities, same-sex marriage, Muslim immigration, the national debt, Planned Parenthood funding, or welfare with no bias?

When it comes to corruption and investigations, do they treat conservatives differently than they do liberals?

Do you think some in the major media simply omit stories if the facts don’t support their narrative?

And finally, how do the media handle political campaigns and elections? Reporting hasn’t been the same since media liberals ganged up with Hollywood and the Left to obliterate Sarah Palin and exalt Barack Obama in the 2008 presidential campaign.

FLASHBACK: Eight years ago, I wrote extensively on the presidential campaign cycle and tried raising more awareness so people would do their own research in the future and see the glaring hypocrisy and double-standards of the Left:

People tend to believe half-truths or lies, if they are repeated often enough. What happened in 2008 should be taught in journalism classes and should go down as the final nail in the coffin of media objectiv­ity. The character assassination, personal attacks, and brutal political assault on former Alaska Governor Sarah Palin should never have been allowed to happen. I’ve never seen so much hatred toward one person trumpeted by the media.

It should be something fair-minded Ameri­cans won’t soon forget.

Here’s some quick history we have forgotten -Post-election polls from 2008:

As if we needed more evidence, journalists overwhelmingly donate money to Democrats over Republicans and in terms of dollars given, it was a 15-to1 ratio. What about employees of big media companies?  Their campaign donation ratio is 100-to-1 favoring Democrats. Surprised?

As Christians and true conservatives, though we know the Bible is the ultimate truth, we should be no less concerned about truth in our country, culture, and media. Sadly, the media doesn’t even try hiding their bias anymore. The fact that the Christian worldview is not popular in today’s society shouldn’t be surprising to us, but we are American citizens and we deserve to know the facts and the truth about government and issues that affect us.

In order to determine if there’s much hope for a turnaround, let’s first look at a few basic Principles of Journalism:

Richard Sambrook, a Journalism Professor at Cardiff University wrote about this and analyzed why the media got the election so wrong:

The lure of celebrity status has taken too many journalists into the arms of those they should be challenging. True independence – political, corporate, cultural – is rare and hard to achieve. It is to be prized for that reason.

Big media is now part of the political/celebrity bubble and tends to forget that journalism as originally defined is meant to be an “outsider” activity. As Shambrook put it – “outside the halls of power, but not outside the communities it serves.”

Another glaring issue is the fact many sycophants in major news organizations hang out with those they should be holding accountable. We’ve seen this occur in the cozy relationship elite liberal reporters have enjoyed with the Obama administration.

Then there’s the issue of tense corporate competition which often leads media to rush to be the first to break a story rather than getting all the facts right.

The current unbalanced news environment has caused a massive increase of activity on social media in part because people tend to trust friends and family over today’s clearly biased media.

One of the glaring double standards was exposed by TMZ which reported that sources say many NBC executives have open disdain for Trump.

The network planned to roll out the [Trump sex comments] tape 48 hours before the debate with Hillary Clinton so the outrage would dominate the news cycle. NBC’s “sex talk tape” generated nearly two hours of news coverage about Trump.

(In contrast, the MRC reported the fact that when Paula Jones held a press conference about Bill Clinton sexually harassing her, that he dropped his pants in front of her and told her to ____ – ___, the liberal media gave the story exactly 16 seconds.)

After the media’s burying reports on Benghazi, classified emails, and Clinton Foundation scandals, the media tried keeping a lid on the Wikileaks revelations but it may have been too much. Plus, many people still don’t know that DNC Chairman and CNN contributor Donna Brazile gave presidential debate questions to the Clinton campaign. Also, according to MRC’s The Watchdog:

New York Times reporter Mark Leibovich allowed Clinton Communications Director Jen Palmieri to pick and choose which quotes she would like him to use in a July article, and which to bury. Palmieri emailed Leibovich, “Let me know if that is not clear. Working from an iPhone on the plane so am not able to access the transcript to cut and paste.”

The insurmountable problems with this level of bias however, go even beyond basic elitism and disdain for those who hold opposing views. They stem from an intolerant, anti-Christian worldview cultivated through years of godless indoctrination in an education system and culture that has become hostile toward conservatives and people of faith.

The solution is a spiritual one because the underlying problem affecting us all is sin. The heart of man is prideful, selfish, and wicked and only God can change hearts and worldviews. Jesus is the Truth, and truth is definitely needed in our nation more than ever.

For the wages of sin is death, but the free gift of God is eternal life in Christ Jesus our Lord.

The mainstream media’s agenda was again exposed, and so was the media’s disconnect from the American public. As a result, more and more of us who are “connected” on social media are choosing to research and get most of our news elsewhere.

Why the Media Got it so Wrong on Trump and Brexit

Can the New York Times really be Fair to Trump?