By David Fiorazo on November 1, 2016 in Bible Prophecy, Christianity, David’s Blog, The Gospel 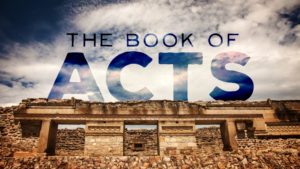 These four messages include an introduction to ACTS: (1) the Proof of the Resurrection, (2) the Powerful Gift of the Holy Spirit, (3) the Promise of Salvation & Birth of the Church, and (4) Repent and Return to God – the Impact of early Christians.

PART 1: Many Convincing Proofs of the Resurrection (Acts chapter 1)

NOTES: Be encouraged by the historical and prophetic evidence contained in God’s Word. Just in the first part of Acts chapter 1, we are reminded about some of what Jesus did and taught; the fact we are chosen by Him, the power we have in the Holy Spirit, the eye witnesses and convincing proofs of the resurrection, as well as clues about His return. We have an everlasting hope that can never perish or fade. Luke was written “so that you may know the exact truth about the things you have been taught.” And the Bible was written so that you may believe Jesus is the Christ, and by believing, have life in His name!

“The first account I composed, Theophilus, about all that Jesus began to do and teach, until the day when He was taken up to heaven, after He had by the Holy Spirit given orders to the apostles whom He had chosen… To these He also presented Himself alive after His suffering, by many convincing proofs, appearing to them over a period of forty days and speaking of the things concerning the kingdom of God.” Acts 1:1-3

NOTES: The book of Acts could be called “The Acts of the Holy Spirit through the Apostles.” The Spirit directed and empowered the early church and caused it to grow in numbers, spiritual power, and influence. Luke, the author of Acts, was Paul’s close friend, traveling companion, and personal physician, and also a careful researcher and an accurate historian. (See Luke 1:1-4)

The book of ACTS chronicles the spread of the gospel, the birth and growth of the church. Luke also records the mounting opposition to the gospel as well as the initial response to the Great Commission. Acts is the first work of church history ever written, providing information on the first three decades of the church’s existence. Its emphasis is that Jesus of Nazareth was Israel’s long-awaited Messiah; it shows the gospel is offered to all people not just the Jews, and stresses the work of the Holy Spirit – mentioned more than 50 times.

PART 3: The Birth of the Church and the Promise of Salvation

NOTES: Jesus had promised to send the gift of the Holy Spirit to help, counsel, and empower His followers. God used the timing of Pentecost to set the stage for the gospel to be proclaimed as thousands of visitors were in Jerusalem for the feast. Peter’s bold sermon (the first sermon in church history) reinforced Jesus being the Messiah as Joel, David, and other Old Testament prophets predicted, and Scripture was fulfilled.

The gospel was preached and the first day, among both Jews and Gentiles – about 3,000 people were convicted and converted. The four major activities of the church are learning God’s Word (the teaching of Scripture), communion (breaking bread), fellowship, and prayer. This was the model set for true community in the body of Christ.

Just as Jesus entered the busy city on Palm Sunday during Passover week, God chose Pentecost to send the Holy Spirit. Then, taking a cue from the arrival of the Holy Spirit, the first event in church history was Peter’s powerful sermon which led to three thousand conversions and launched the Christian church. Preaching the Word has always remained central to the primary mission, but today’s church has generally been silent and ineffective in changing or preserving culture for Christ. Why?

PART 4: Repent and Return to God – the Impact of the early Christian Church

NOTES: People were convicted of their sin and converted to Christ because the truth of Scripture had pierced their hearts. After the Holy Spirit’s arrival and during the very first event in Church history (Peter’s bold sermon), Peter pleaded with the people to repent and be saved from this wicked generation! He said the promise of salvation and gift of the Spirit are for all who would believe, they changed their minds about who Jesus is, and 3,000 people were added to their number in one day. The foundation of the early church is then described: “They were continually devoting themselves to the apostles’ teaching and to fellowship, to communion (the breaking of bread) and to prayer.” Acts 2:42

Chapter three starts with a miraculous healing, the people reacting in amazement which opened the door for Peter’s second sermon. That led to more converts to Christianity, and eventually, the opposition from the Jewish religious leaders. Then, after the miraculous healing of the 40 year-old man, Peter unleashed the second sermon in church history! How about us? Why don’t most of us speak up for Christ today? Is it because we know it is unpopular and some will call us intolerant or foolish? There will always be opposition and people will always come against the truth and the gospel, but are we trying to please God or man?

Let’s clarify one goal of the church: to mature the saints through the preaching of the word, through fellowship, and discipleship. We also gather to praise and worship God. These are important goals that should mark every church. But these things can also be accomplished in heaven. So what is the primary goal of the church? Jesus answered this question by charging us to, “Go therefore and make disciples of all nations… teaching them to observe all that I have commanded you.” One thing we can NOT do in Heaven is evangelize.

(*These four videos on Acts were presented at Crossroads Church in Sturgeon Bay, WI in 2016.)

One Response to Four Part Video Series on the book of ACTS, David Fiorazo