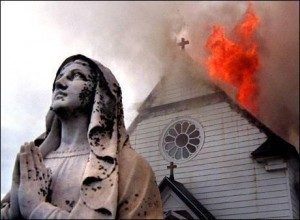 This is an urgent message for these dangerous, deceptive days many refer to as the end times. Christian friend, be encouraged to seek first the kingdom of God, cultivate an eternal perspective, and understand the times in which we live.

But realize this, that in the last days difficult times will come… Indeed, all who desire to live godly in Christ Jesus will be persecuted. But evil men and impostors will proceed from bad to worse, deceiving and being deceived. 2 TIMOTHY 3:1, 12-13

Do not be deceived by false teachers infecting the church in America and minimizing the inerrant truth of Scripture. Do not be deceived by the biased liberal media purposely swaying public opinion; the seduction of Hollywood – pushers of perversion and rebellion against God, a secular government and godless education system, a culture of moral relativism, or the Christian Left’s promotion of ambiguity and apostasy. Good is being called evil and truth has been replaced by moral relativism as the normalization of sin – particularly homosexuality – has permeated every aspect of American culture.

This sermon is  a heartfelt message to Christians: Do Not Be Deceived – Wake Up and Watch Out!

Do this, knowing the time, that it is already the hour for you to awaken from sleep; for now salvation is nearer to us than when we believed. The night is almost gone, and the day is near. Therefore let us lay aside the deeds of darkness and put on the armor of light. ROMANS 13:11-12

If our hope is in people, politics, or possessions, we will always be set up for disappointment and left feeling empty; if however, our hope is in the Lord Jesus Christ alone, we will have a secure, eternal hope that can never perish or fade, a hope which is an anchor to our souls in these tumultuous times.

Be reminded that there is nothing new under the sun. Similar to the watering down of the Word of God in many of today’s churches, there were false teachings in the early church. More recently, about a hundred years ago – back in 1923, J. Gresham Machen said this, “An examination of the teachings of liberalism will show that at every point the liberal movement is in opposition to the [biblical] Christian message.”

Wake up, and strengthen the things that remain, which were about to die; for I have not found your deeds completed in the sight of My God. 3 So remember what you have received and heard; and keep it, and repent. Therefore if you do not wake up, I will come like a thief, and you will not know at what hour I will come to you. REVELATION 3:2-3

Indeed, all who desire to live godly in Christ Jesus will be persecuted. But evil men and impostors will proceed from bad to worse, deceiving and being deceived. 2 TIMOTHY 3:12-13

Then The End Will Come: the Importance of Bible Prophecy (part 1)

The Church Infecting Christianity: Where Did the Emergent Church ‘Emerge’ From?

What Happened to Our Heritage?

The Contagious Cult of Liberalism