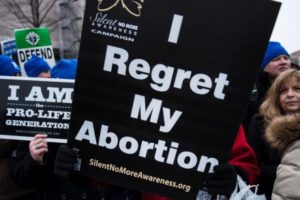 Listen to Me, O islands, and pay attention, you peoples from afar. The LORD called Me from the womb; From the body of My mother He named Me. Isaiah 49:1

“If you are considering an abortion, please understand that it will affect you for the rest of your life. It will not bring an end to your problems or your difficult situation. It will leave you feeling empty, guilty, and full of shame.” -Barbara G. testimony

Americans have come a long way. Fifty years ago, abortion was taboo and people were embarrassed to even say the word, let alone consider the act. Today, abortion is so common one out of every three women in America will have at least one abortion in her life. Abortion has gone from being prohibited to being a private matter to being an openly promoted money-making procedure. Millions, including large numbers of Christian women, have had abortions, so let’s lay out some painful but neglected facts.

If you’ve had an abortion, do not give in to self-hatred; you are not alone and you can still be forgiven. Please turn back to God immediately. To every man and young boy, if you got someone pregnant outside marriage and have been an accomplice to abortion, you can also be forgiven if you repent. Abortion doctors and clinic workers can be forgiven, and every politician that has supported the life-destroying act of abortion can also be forgiven. Confess your sins, lay them at the foot of the cross, and walk away!

God loves you and can use your testimony, but the consequences of your choices may not easily be forgotten or removed from your life. We’re going to examine abortion from medical, moral, psychological, scientific, and spiritual aspects. My goal is to encourage healing and inform those who have carried a precious human life in their womb, but have no child to show for it due to their choice.

Taking responsibility for your actions is important, but don’t be too hard on yourself. Long before the normalization of homosexuality in America; feminism, promiscuity, and open rebellion helped lead to the sexual revolution, increased adultery, and the devaluing of human life. It started in the early 1900s and kicked into hyper-drive in the 1960s. On top of this, kids have to deal with many influences: pressure from peers, teachers, Hollywood, Planned Parenthood marketing campaigns, pop culture idiocy, and immoral role models.

With everything that is against young women today, it’s that much more important for parents to be involved and aware of what’s going on in their lives; this includes what they are being taught in school under the guise of “health” or sex education.

There is some good news if you look at some current trends, including a study by the Guttmacher Institute showing the abortion rate to be at its lowest point since 1973. Though it is good the rate has dropped to 16.9 abortions per 1,000 women, millions of lives are still being destroyed.

The number of Americans with pro-life views is increasing. Education, technology, and pro-life campaigns are exposing the dangers, health risks, and the immorality of a society that kills their offspring for convenience sake.

More young people today are growing up with a respect for life many of us did not have decades ago. Medical advances and ultrasound technology are responsible for much of this. Research proves more women who see sonogram pictures of their babies or hear the heartbeat prior to birth change their minds about having an abortion.

Today, any informed or remotely educated individual would admit the question about whether a child in the womb is human is settled science. (It is tragic we didn’t take God’s word for it from the beginning.) But we’re still left with the problem of rampant sexual activity and fornication throughout our culture and even among many sitting in the pews every Sunday. Sex has been flaunted and promoted for decades in TV commercials and programming, in movies, video games, magazines, billboards, and now on the Internet.

We must work to educate, inform, and promote life-saving legislation by supporting pro-life candidates. Abortion is a fiscal, medical, moral, political, psychological, social, and spiritual issue.

The truth is the pro-life movement is growing, and more pro-life legislation has been passed in the last several years, helping limit the number of abortions. Great strides have been made in this fight for life in America. Since 1990, the number of abortion clinics has fallen by 73%. Even more revealing, a Marist poll found that 84% of Americans think abortion should be restricted.

That same year, Planned Parenthood Action Fund President Cecile Richards said the lives of her three children began when she delivered them. Really – life begins at delivery? Let’s analyze this worldview. She also said people hold different views on when life begins. So what?

It doesn’t matter how many views there are! What matters are the biological facts and scriptural truth about when life begins and Who creates life. Either believe the Bible, or make up the rules on right and wrong. Life begins at conception according to the one true God – end of debate.

Ray Comfort is a well-known author and evangelist, founder of Living Waters Ministry, Way of the Master television program, and producer of documentaries such as 180 Movie. Comfort explains how lucrative the big abortion business is and how money fuels their passion for death. He makes a shocking comparison when he says, “it’s all legal, efficient, and done behind closed doors, just like the Holocaust.” How’s that for some perspective? Comfort states:

With the efficiency of a drive-through, they will expedite the killing of your baby for just $765 for up to a 16-week-old child, but the price increases if the baby is over 19 weeks; you will be shelling out three times the amount, and paying a whopping $2,165. That’s pretty good income for a few minutes of ripping off the arms, the legs, and head of a baby onto a table; checking the body parts to make sure they’re all out, and then putting them in the trash.

Sadly, it takes less than thirty minutes for an abortion doctor to complete the task. How on earth did human beings with hearts, souls, and consciences – in America – allow this slaughter to reach the level it’s at today? More importantly, why do we allow it to continue unchecked? We must have fallen away from God. If only our side were as committed to the cause of life as they are to death.

Your hands made me and formed me. Give me understanding, that I may learn Your commandments (Psalm 119:73).

The undeniably feeble-minded should, indeed, not only be discouraged but prevented from propagating their kind. —Margaret Sanger [Margaret Sanger, Birth Control Review, May 1919, page 12.]

Many people forget Planned Parenthood’s founder, Margaret Sanger, set out to use birth control “to create a race of thoroughbreds,” as she put it, and to control the population in America. She had been writing about and promoting eugenics before the 1920s. Sanger openly commissioned Adolf Hitler’s top eugenicist, Dr. Ernst Rudin, to not only write for her Birth Control Review publication but to serve as an advisor to her organization! She supported Nazi Germany’s infanticide program in the 1930s as well as Hitler’s goal of Aryan white supremacy. Margaret Sanger believed it necessary to sterilize “genetically inferior races” and exterminate those considered “human weeds.”

Abortion rates, particularly those from many of America’s inner cities, should cause us to wonder if the original vision and work of Margaret Sanger to reduce minorities is becoming a reality right before our eyes. Sanger’s American Birth Control League laid the groundwork for her first clinic in Harlem in 1929, an area of New York City heavily populated by blacks. Not many people have heard the truth about the dark history of Planned Parenthood.

Center for Disease Control and Prevention (CDC) numbers indicate the horrific fact that nearly 72% of black babies are aborted in Mississippi. In 2014, CNS News also reported more heart-wrenching news. There are now more black babies aborted than born in New York City according to the NYC Department of Health and Mental Hygiene, Office of Vital Statistics. The number of black abortions in NYC is over 42% while Hispanics are not far behind at 31%.

The abortion figures are more staggering when you consider 82% of New York City abortions were done on black or Hispanic babies. In Georgia it was 73%…

Margaret Sanger’s mission is not only being accomplished today, but continues to be promoted. Shocking new statistics show black and Hispanic populations taking the biggest hit. Is this not racism? Where are Al Sharpton and Jesse Jackson? Where’s Oprah? Hillary Clinton said she is “in awe of Margaret Sanger” and was given Planned Parenthood’s “Sanger Award” in 2009.

If the media, Hollywood, and Democrats are truly concerned about protecting women, why is there no outcry over this? Since wombs are dangerous places for black babies, isn’t there a story on racism here? The media reports practically any other story remotely resembling a race issue, so why the silence on the one thing that should matter the most – life?

Margaret Sanger sure would be proud of America today…

*End part 1 of this book excerpt from The Cost of Our Silence: Consequences of Christians Taking the Path of Least Resistance.

Accommodating Lies in the Transgender Debate
The ‘Church’ Infecting Christianity: Where Did the Emergent Church Emerge From?