By David Fiorazo on April 6, 2016 in Big Government, Religious Freedom 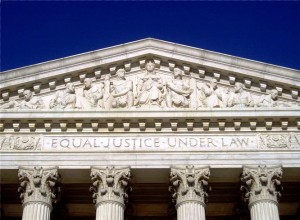 “You seem to consider the judges as the ultimate arbiters of all constitutional questions; a very dangerous doctrine indeed, and one which would place us under the despotism of an oligarchy … Their power is the more dangerous as they are in office for life and not responsible, as the other functionaries are, to the elective control.”  —Thomas Jefferson, 1820 letter to William Jarvis

(This is a book excerpt from The Cost of Our Silence.)

Since our founders established a system in which all three government branches were accountable to the people, they would most likely be astonished today that the people for which the Constitution was written have done little about the massive growth, recklessness, and unchecked power of the United States government.

The three branches of government are no longer equal and tragically, a handful of justices now dictate public policy, overpowering the citizens they were appointed to serve. Though our founders realized man craves power and they had the insight to place checks and balances on government, they might not recognize the country today.

Not only have men taken authority not granted them by the Constitution, judicial tyranny has reached new levels in America and the abuse of power by judges seems almost commonplace. There have been many cases in recent history that should have raised concerns, but let’s touch on a few of them.

The first few years in the 1960s would prove both pivotal and detrimental to the church, culture, and family values in American society. Christians had already been dealt a blow in the previous decade as the Johnson Amendment affected churches and nonprofits, but Christianity would now be targeted in the public school system.

In the 1962 landmark ruling, the Supreme Court again misused the Constitution and without citing a single precedent, banned voluntary prayer from public schools. In Engel v. Vitale, the Court claimed that a simple nondenominational prayer in New York schools established “an official state religion.”

Justice Potter Stewart, a voice of common sense and reason, was one who disagreed with the decision, saying:

With all respect, I think the court has misapplied a great constitutional principle. I cannot see how an “official religion” is established by letting those who want to say a prayer say it. On the contrary, I think that to deny the wish of these school children to join in reciting this prayer is to deny them the opportunity of sharing in the spiritual heritage of our Nation.”

Our founders were rightly concerned the federal judiciary might seize powers from the states. Thomas Jefferson was one of several who warned the courts could gain power little by little, advancing like a thief “until all shall be usurped from the states.” We truly do not give these men enough credit for their wisdom and foresight.

The Engel ruling would be the basis for many future decisions involving the blotting out of God and the Bible, banning the Ten Commandments, prayer, and the quoting of Scripture in public schools. Remember, when something good, moral, and biblical is eliminated or removed, something bad, immoral, and unbiblical will replace it.

One year later, Pennsylvania took the next hit in the 1963 case Abington School District v. Schempp in which voluntary Bible reading and prayer at the beginning of each school day was abolished…

The Bible is the chief moral cause of all that is good and the best corrector of all that is evil in human society; the best book for regulating the temporal [secular] concerns of men. Noah Webster (1758 – 1843)

The path the Supreme Court sent this nation down has been disastrous for the family and future of America. This Court has ruled a life is not life, marriage is not marriage, and family is not family.

When our government ignores American citizens and refuses to allow the people to decide by voting on state issues, we end up with laws having consequences that extend far beyond the case for which the ruling was handed down.

Case in point? In 1973 one of the most horrific rulings was decided when abortion was legalized and made the law of the land in the case of Roe v. Wade. God’s Word and His law trumps man’s word and man’s law – every time, in every possible situation. Having acknowledged this, looking at the issue from a constitutional perspective, we must set aside moral arguments for a moment because that case should have been a matter of state’s rights. Murder is against God’s law; abortion is man’s law. Scripture holds abortion to be sin and in America, it used to be illegal.

…The Tenth Amendment to the U.S. Constitution reads:

The powers not delegated to the United States by the Constitution, nor prohibited by it to the states, are reserved to the states respectively, or to the people.

Just four states had legalized abortion in 1973, while forty-six states restricted abortion, but the Supreme Court decided to enforce an unwanted law on the entire country. The ruling continues to divide American families and political parties today.

Using the court’s reasoning, since prostitution is legal in Las Vegas and illegal in every other state, should the Court legalize prostitution in all fifty states based on one case?

Activists and radicals have achieved preferred rulings by feeding their cases to power-hungry courts; a runaway judicial branch has set the stage for an executive branch dictatorship in a country where this was never supposed to be possible. Some conservatives have tried fighting the corruption, but since many of their voices are not loud enough and the media typically opposes their cause, they receive little attention.

Here are a few case examples many of us have long forgotten:

Let’s look more closely at this 2002 case. Justice Moore was brought before a federal court because he believed state officials have the right to acknowledge Almighty God. In Glassroth v. Moore, the trial opened with words acknowledging the God whose laws were in question: “God save the United States and this Honorable Court.”

Attorney for Justice Roy Moore, Herb Titus, declared in his opening statement the case was about religious freedom as well as censorship:

The public acknowledgement of God as the source of our liberties is essential if we are to preserve those liberties. As the Declaration of Independence attests, if the source of individual rights is not God, then our rights are not inalienable, and if you take God out of the equation, then the all-powerful state is unchecked by any higher law.

Polls from CNN, USA Today, and Gallup showed 77% of Americans were against the federal court order to remove the Ten Commandments monument.

What happened to the voice and power of the people? In every one of these past major cases affecting millions of Americans, none were decided by a majority vote or the people’s will; they were decided by a small group of unelected justices. Contrary to the beliefs of Obama-appointee, Supreme Court Justice Sonia Sotomayor, judges and courts do not make laws.

Marriage laws were struck down nation-wide despite the fact majorities from states across the country went to the polls over the years and voted their deeply held beliefs in favor of defining marriage between one man and one woman.

Moreover, at least thirty-one states had passed bans on partial birth abortion but were suspended by federal judges. …At the national level, after years of incremental efforts on a bill to ban partial birth abortion, it was finally passed by both houses of Congress and signed by President George W. Bush on November 5, 2003. Federal Judge Richard Kopf suspended the law one hour later.

In the wake of the Alabama Supreme Court decision to remove the Ten Commandments, Ambassador Alan Keyes passionately explained:

Generations have acknowledged Scripture as a foundation to our lives and freedoms. Our founders believed people in their individual states have the right to live according to their faith, under institutions they put in place to govern themselves. If the people believe the Constitution was violated by a judge, they do not have to sit back and take it. The Declaration of Independence also supports the idea that “when there is a long train of abuses that are destroying our rights, the founders said that it is not only our right, it is our duty to oppose them.”

The Ten Commandments must not simply be a symbol of morality; they must be revered again in our hearts. When the Word of God is written on our hearts, morality in our communities will be affected the way our founders envisioned. A friend once said that we love our monuments – we just don’t like to obey the commandments.

So we have plenty to deal with including judges imposing their will on the people as we had in last year’s ruling legalizing same-sex “marriage.”

Americans in the marketplace should not be subject to predatory legal attacks simply for abiding by their beliefs. This kind of bullying may be practiced in a dictatorship, but violations of conscience have no place in the United States.

Activists are taking full advantage of the court’s rulings because the Left does have an agenda. In a statement that would make Hitler proud, Raymond Sexton of the Human Rights Commission said it’s time for Christians in the marketplace to “leave their religion at home.”

Enemies of the Lord Jesus Christ have been gaining ground, and more citizens are being forced to choose God or government.

Has the conflict for the soul of America reached a turning point? Souls, truth, godliness, and righteousness are on the line, and our children are watching. Our freedoms will not last if the majority of Christians remain casual observers and spectators. Let’s encourage each other in Christ to be active, effective citizens and servants of our God and King because regardless of what elites think, all authority and power comes from Him.

For the Lord is our judge, The Lord is our lawgiver, The Lord is our king; He will save us— (Isaiah 33:22) To whom then will you liken God? Or what likeness will you compare with Him? He it is who reduces rulers to nothing, Who makes the judges of the earth meaningless (Isaiah 40:18, 23).

*This is an excerpt from the chapter, “Judicial Tyranny” in the 2015 book, The Cost of Our Silence from Aneko Press.

How to Respond to Judicial Activism by Supreme Court on Marriage

Krauthammer: If Obama Wins Executive Amnesty Case, ‘You Can Send Congress Home,’ There Are No Laws

Challenging sermon by Pastor John MacArthur, “We Will Not Bow”

Sexual Confusion: the New Religion
When Tolerance is a One Way Street