By David Fiorazo on March 16, 2016 in Christianity in America, David’s Blog, Politics 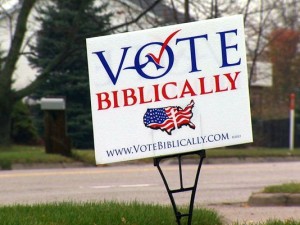 Most people agree this is one of the most unpredictable and unusual election cycles in American history. For those who want substance over sensationalism, it is one of the most frustrating. For Christian conservatives, this could be the most disappointing. At least it’s entertaining.

Americans are angry, I get it; but let’s not misplace our anger and out of desperation, elect another pagan king.

Some people think Donald Trump is a conservative. I find this to be inconceivable because if he’s conservative, then by that definition I certainly am not.

Marco Rubio deserves some credit for doing the responsible thing and dropping out of the Republican race last night. He’s incredibly intelligent, a principled man and excellent speaker. At CPAC earlier this month, Rubio explained the current dilemma:

“If you had told me a year ago that the front-runner at this stage in the Republican campaign would be a supporter of Planned Parenthood, who says he doesn’t stand with Israel, has a long record of supporting government-sponsored healthcare, I would say ‘on what planet would that be the Republican front-runner? But it’s happened. And I think we have to ask ourselves why we allowed that to happen.”

We’ve learned a few more things in this process: many polls are misleading at best or wrong at worst, the media often puts their ratings over content that would actually inform people, and there appears to be a ‘Uge’ difference between evangelicals and Trumpvangelicals.

First, it is important to understand how polls are administered including: who created the poll, how the questions are worded, where the polls are taken and when, are there more than ‘yes’ or ‘no’ questions, and how large is the poll sample. I’ve noticed quite a discrepancy this year between poll results leading up to a caucus or primary from actual votes cast. This can appear that certain pollsters and media outlets are trying to sway voters.

Tracking the amount of news coverage for each candidate, sources including mediaQuant and the Media Research Center have reported that Donald Trump has been awarded $2 Billion in free media coverage. Might this factor into Trump’s popularity just a bit?

Also, exit polling is typically designed by the liberal news media to help them report as votes are coming in. ABC, CBS, NBC, FOX, CNN, and the AP make up the National Election Pool. Edison Research in New Jersey sends out interviewers to various polling places on election day to a random sample of voters.

The most disturbing thing about exit polls is the media forms opinions and attempts to explain the religious views of voters who only answered one or two questions about religion! You read that right: many of these voter surveys include a single question about faith.

The most common questions on religion have to do with how often a person goes to church, would they describe themselves as a born again or evangelical Christian, and are they Protestant, Catholic, Mormon, Other Christian, Jewish, Muslim, or no religion.

The reason so much attention is given to “evangelical voters” is because years ago, when Americans were generally more of a God-fearing, moral people and our faith was the most important thing in our lives, candidates would fight to win these voters. Today however, there is much confusion about spirituality and there seems to be no consensus about definitions and what it really means to be a Christian.

Another problem with the question about church attendance is people tend to give the socially acceptable answer and exaggerate their religious interest. As I’ve pointed out for years, too many professing Christians are not committed to the cause of Christ and live out their faith in public. Nominal believers abound, and one of the only ways to determine where a voter stands is to ask how important a person’s religion is to them or how active they are in defending or sharing that faith.

A conclusion made by Princeton University sociologist, Robert Wuthnow, is that “pollsters have created an inaccurate, shallow and misleading portrait of American religion,” and he would rather see a combination of faith questions. Agreed!

One national poll had Trump with 42 percent support among “evangelicals.” In second place was Ted Cruz -known more for his biblical faith and conservative values – at just 25 percent. Something doesn’t add up. Moreover, on average, 64 percent of evangelicals in southern states voted for someone other than Donald Trump. 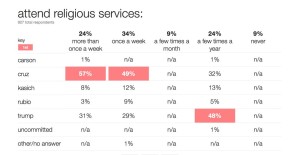 In exit polls two weeks ago, Cruz overwhelmingly won voters who said it matters “that a candidate shares your religious beliefs,” and when it came to “values voters,” Cruz averaged 41 percent while Trump averaged a mere 13 percent. When discussing candidate qualities however, Trump averaged nearly 80 percent of voters who said their main concern is “telling like it is.”

What can we make of this so far? According to Biola University’s Darren Patrick Guerra, “serious evangelicals” aren’t going for Trump, and the more dedicated a person is about their Christian faith, the more they seemed to support Cruz or Carson.

Obviously, there are some who disagree with this conclusion. At Liberty University, Jerry Falwell, Jr. stated:

“God called King David a man after God’s own heart even though he was an adulterer and a murderer. You have to choose the leader that would make the best king or president and not necessarily someone who would be a good pastor… [someone to] bring us back to economic vitality…”

Red State’s Erick Erickson writes that Falwell is “flat out mocking God” and it is “shameful” that Falwell Jr. would compare David’s adultery to Trump’s, who bragged about his sin. Sadly, Trump admits he has never sought forgiveness from God when in fact, David was severely punished by God causing David to cry out to Him:

Against You, You only, I have sinned and done what is evil in Your sight, So that You are justified when You speak and blameless when You judge… Create in me a clean heart, O God, and renew a steadfast spirit within me. (Psalm 51:4,10)

The church has changed, culture and morality have changed, and America sure has changed. Many social conservatives are upset with Christians who too easily compromise. Politics have caused much division, even within the Church, and the current president has made the divide much worse in our nation as a whole.

In an interview with World Magazine, author and nationally syndicated radio talk show host, Steve Deace explained how he has been grieved to watch how professing Christians have been “willing to define down what they believe in order to support a person.”

If we’re not going to advance Christian ideology by sharing the gospel of Jesus Christ, impacting our county and electing God-fearing candidates, then let’s call it a night. Moses was instructed to “select out of all the people able men who fear God, men of truth, those who hate dishonest gain…” (Exodus 18:21)

I continue to pray for God to have mercy on us and delay His judgment, but America may soon get what America deserves if we aren’t already. The tragic truth is we have neglected our responsibility to lead and influence every aspect of this nation as many before us have rightly done.

“Now more than ever before, the people are responsible for the character of their Congress. If that body be ignorant, reckless and corrupt, it is because the people tolerate ignorance, recklessness and corruption. If it be intelligent, brave and pure, it is because the people demand these high qualities to represent them in the national legislature … If the next centennial does not find us a great nation…it will be because those who represent the enterprise, the culture, and the morality of the nation do not aid in controlling the political forces.” James Garfield, 1877

Are we the people controlling the political forces? Does this country resemble a godly and moral nation anymore? And yet, over seventy percent of U.S. citizens still claim to be “Christian.”

Conservatism in the Age of Trump

NO, Donald Trump Does Not Have Majority Support Among Evangelical Voters

The Contagious Cult of Liberalism
Sexual Confusion: the New Religion