By David Fiorazo on February 7, 2016 in Creation vs Evolution, David’s Blog 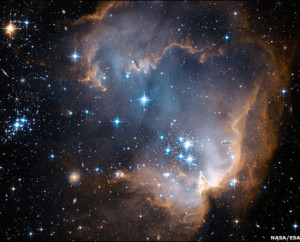 By faith we understand that the worlds were prepared by the word of God, so that what is seen was not made out of things which are visible. Hebrews 11:3

The heavens declare the glory of God, and the sky above proclaims his handiwork. Psalm 19:1

The universe reveals a complexity, design, and magnificence that staggers the imagination, and logic shows us that life could not have appeared by some random, spontaneous process. Evidence actually points to a master plan and an intelligent being; such intricate, organized design must have come from a Designer.

The theory of evolution however, has been generally accepted by the scientific community and academia even though it is a stretch to conclude evolution is supported by factual data. They cannot accept the fact the Bible is a key to understanding the earth’s origins and the history of life. The truth is it takes much more faith to believe in a random creation and a purposeless existence.

As Christians, we begin with the Word of God as our foundation and by faith, we advance from there. All Scripture is inspired by God and is profitable (2 Tim. 3:16), and no prophecy was ever made by an act of human will (2 Peter 1:21); such eternal perfection had to come from God through men led by the Holy Spirit. Our worldview is crucial and basically comes down to three words: God or man.

A surprising number of Americans do believe in a Creator, even nonreligious people. According to Lifeway Research, about 72% think there is a creator and about 79% agree that the fact we exist means someone created us.

The following an excerpt from the chapter, “Worldview War” in The Cost of Our Silence.

Understanding how historical and observational science compliment and support the creation account in Scripture is essential. We are fooling ourselves if we say we believe in parts of the Bible and at the same time believe man’s theories on the big bang or evolution.

We often hear people suggest the Bible and science contradict each other and that we must keep them separate. The Bible is full of history and knowledge. Most scientists don’t believe the Bible and yet search for knowledge! Here’s the problem: scientists study evidence and discoveries (knowledge) and look for understanding, but they disagree with the Bible. Understanding comes from opening up God’s Word (Psalm 119:130).

According to the dictionary, the word science simply means “knowledge.” It means “a branch of knowledge or study; systematic knowledge, facts or principles.” The word conscience is derived from two words: con meaning “with” and science meaning “knowledge.” So, conscience is defined as “the inner sense of what is right and wrong in one’s conduct or motives; an inhibiting sense of what is prudent” regarding our thoughts and actions.

Human conscience may be influenced by society, but society does not give it to us. Every sane human being intuitively knows the basic difference between right and wrong regardless of what they were taught. Since we all have a conscience and knowledge within ourselves regarding morality, how did it get there if God didn’t write His laws on each of our hearts? Creation testifies there is a Creator!

…because that which is known about God is evident within them; for God made it evident to them. For since the creation of the world His invisible attributes, His eternal power and divine nature, have been clearly seen, being understood through what has been made, so that they are without excuse. Romans 1:19-20

If God exists, how can anyone think He is not powerful enough to create all things when confirmations, manifestations, and declarations of His workmanship are all around us? We must decide where we stand on the origin of man and know why we believe what we believe so we will no longer be silent. Faith is the substance of things hoped for, the evidence of things not seen (Hebrews 11:1).

Where creation is concerned, how do we answer those who don’t believe in God or claim the Bible is not true? Many respected professors and “experts” say religion and science are irreconcilable. Most of these scholars do not believe in God, and others say God does not even exist. Therefore, they conclude there cannot be any moral absolutes or fixed-in-concrete truth. If they are right, how can they say anything is true?

In other words, if there are no moral absolutes, how can we be absolutely sure that what man claims is “truth’” is indeed true? The Bible teaches Jesus is the Truth; He is God, but according to the intelligence and wisdom of man, the Bible is not true and Jesus is not God. They just cannot prove what they claim.

That your faith should not rest on the wisdom of men, but on the power of God (1 Corinthians 2:5).

Since Jesus said He is the only way to the Father, and John tells us by believing in Him we can have everlasting life in His name (John 20:31), we better get this whole thing right about creation and decide whether Genesis is true or not. Our salvation depends on the integrity of Scripture. If Jesus is “the Word” and He was “with God in the beginning;” if “the Word was God,” and since no one has ever dis-proven His resurrection from the dead, then it must be actual history which means Jesus truly is eternal. Christianity is faith securely founded on fact.

Jesus Christ is both Creator and God. Colossians 1:16 tells us by Him all things were created, both in the heavens and on earth. And John 1:3 affirms this truth:

Why is it so important to establish that the universe was intelligently designed by a Creator? For one, think about young children for a moment; their behaviors, beliefs, and lives reflect what they are taught regarding how they came into existence. If they know they were uniquely created and designed inside their mother’s womb by a God who loves them, they will live and treat others much differently. They would value life and have a different morality than if they are taught they are here by accident or because of some meaningless, random process.

Every life is a work of art and has purpose! Some people accuse Christians of being anti-science when just the opposite is true. How can Christians be against science when the Bible is full of knowledge? What many scientists disagree with is the spiritual aspect of the Bible: mad needs God. What they cannot deny is practically every time a new archaeological discovery is excavated in the Middle East or neighboring continents, it supports some scriptural reference to a people, place, or time.

NEWTON AND SCIENCE REINFORCE FAITH IN THE BIBLE

Many of our greatest scientific discoveries and advancements were made by Bible-believing Christians like Sir Isaac Newton, Blaise Pascal, Louis Pasteur, and others. The earliest scientists set out to learn more about God through the study of His creation as well as their discoveries. In fact, Sir Isaac Newton, considered one of the greatest scientists and mathematicians the world has ever seen, wrote much more about faith and the Bible than he wrote about science.

Born on Christmas Day in 1642, Newton and other scientists believed the creation account in the Bible as well as the account of the worldwide flood during Noah’s time. Most educated people believed this until the late 1800s. Regarding creation, Newton stated:

God is one and the same God always and everywhere … He endures always and is present everywhere, and by existing always and everywhere he constitutes duration and space; … Tis inconceivable that inanimate brute matter should (without the mediation of something else which is not material) operate upon & affect other matter without mutual contact.

By the time Newton was ten years old, he was studying the book of Daniel and would later write about Daniel and Revelation in Observations Upon the Prophecies. Considered by others a theologian during his lifetime, Isaac Newton was a Bible scholar, fluent in ancient languages with extensive knowledge of history. He believed the Bible to be literal, and throughout his life he tested biblical truth against the scientific methods common at the time, never finding a contradiction.

Though some claimed Newton was a deist influenced strongly by Christianity, he viewed his own work as a ministry to reinforce faith in the Word of God. He believed God was and is the Creator, and nature overwhelmingly proves His existence. He questioned others who had opposing opinions and theories about the earth’s origins and warned against those who held man’s knowledge too highly. In his 1687 book, Philosophiæ Naturalis Principia Mathematica, Newton stated:

This most beautiful system of the sun, planets, and comets, could only proceed from the counsel and dominion of an intelligent Being. […] This Being governs all things, not as the soul of the world, but as Lord over all.

Isaac Newton wrote approximately 1.3 million words about biblical subjects. He studied at Cambridge and attended an Anglican church, but some claim Newton was a heretic, claiming he did not believe in the Trinity. Historians disagree on whether Newton held to a more eastern or western orthodox view of Christianity.

Though he read the Bible daily, helped pay for the distribution of Bibles among the poor, and served on a commission to build new churches in England, he is not known to have preached the gospel and seldom made public statements about his theology. Because of the Blasphemy Act of 1697, some say Newton would have been punished had he spoken publicly about his faith. Regardless, Isaac Newton is most known for his scientific achievements and influence.

Many modern scientists assume that because there is observable change in nature, evolution must be a fact. An important distinction is evident; we all acknowledge much of the change they refer to, but that doesn’t prove “molecules to man” evolution. When a person places the intelligence of man over God’s Word, they can blindly support what other scholars have taught them. Observational science cannot prove evolution; nobody was alive to witness creation.

Historical science is the study of events that occurred in the past that cannot be examined or tested in the present day. Herein lies the controversy: Scientists differ in opinion as to what happened prior to mankind. We weren’t here so how can they know for sure? Their theories must necessarily be based on assumptions which are where the Big Bang theory comes from. Observing or testing the event of creation is impossible. Not only is the theory based on educated guesses of man, it is impossible to know how and when the bang happened. Isaac Newton was correct in his order of study: He began with the Bible and worked outward from there.

What if My Child has to Take a Class on Evolution?

The Evidence Doesn’t Speak for Itself

Is Evolution a Religion? 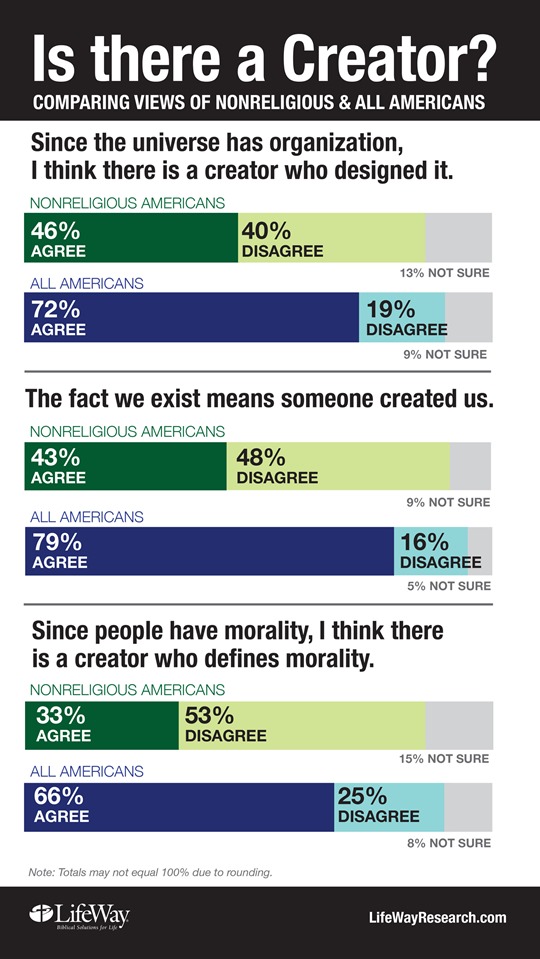