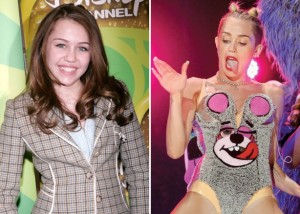 She’s losing it, but who will tell her the truth? Miley Cyrus is cussing, partying, and twerking in dangerous territory; openly rebelling in the face of the God she once claimed to believe in. Tragically, she may be taking millions of young kids with her. I just saw a concert video clip of her that is too offensive to describe.

Rather than be an enabler or a “yes man,” will someone speak up and warn her before it’s too late? Miley may not care and those closest to her may not care, but I hope they don’t end up regretting it one day. All you and I can do is pray for her from a distance that she will turn to Jesus Christ.

Some may claim I am judging her because I “don’t know what’s in her heart.” Sorry, that’s a cop-out. Whether she believes it or not, she will be held accountable when she stands before God. So will we. The Bible teaches that her path will only lead to destruction.

In the meantime, this should be another caution for us to guard against soul pollution in our own homes and warn today’s young, impressionable children who idolize celebrities like Cyrus. Peer pressure often overrides faith and common sense. Christian parents, your kids can still end up following the crowd, not wanting to appear ‘uncool’ to their friends. Many of us have been there. One concerned Mom said,

“Dear daughter, I am going to fight or die trying to keep you from becoming like the Miley Cyruses of the world. You can thank me later.”

I wasn’t surprised by her transformation over the years. Fame often does that. Without Christ and biblical morality, there is only one direction we can go. It seems she cannot cuss enough, be too bizarre on stage, and she cannot show too much skin. Apparently, her music leaves much to be desired so perhaps she feels the need to overcompensate.

It’s like she is aiming to be the next Madonna or Lady Gaga by going overboard with satanic, sexual or sadistic antics and song lyrics in the hopes of topping other pop-shock queens. There are some who are concerned Cyrus is in danger of becoming the next Hollywood train wreck. A few years ago, I wrote about the direction she has proudly and defiantly chosen:

Though she seems lost, no one is impossible for God to reach… We shouldn’t expect secular celebrities to live according to God’s Word…She and countless others need the love and forgiveness of Jesus Christ. No one is without hope, but the Bible warns us the Lord’s return is close. It’s time to wake up and speak up because “now salvation is nearer to us than when we first believed (Romans 13:11).”

Her foundation was obviously not built on Jesus Christ and the Bible. It’s sad; and deep down, I wonder what her parents think. So yes Christian friend, we should pray for her and all lost sheep to come back to the Good Shepherd. If Cyrus does somehow open her heart to the living God, imagine how powerful and influential her witness could be.

Father in Heaven, help us to be compassionate and caring enough to reach out to the lost and speak the truth in love. Give us the strength to be bold, but not judgmental because we were all sinners saved by Your grace. Please intervene in the lives of Miley Cyrus and all those who once may have known You. Bring them back, remind them of your enduring love, and change their hearts like you changed ours. When we address these issues in our culture, please give us a proper balance of disgust with the sin and love for the one caught in its web. Use us to draw others to You, in Jesus’ name, Amen. 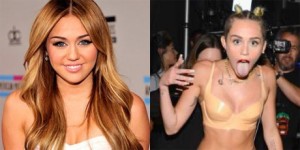 UPDATE: ‘Open to Every Single Thing’ Except God
Miley Cyrus recently posed nude (with a pig) for Paper magazine. In an accompanying interview, she said, “I am literally open to every single thing that is consenting and doesn’t involve an animal and everyone is of age. Everything that’s legal, I’m down with. … I don’t relate to being boy or girl, and I don’t have to have my partner relate to boy or girl.” She said she told her mother at the age of 14 that she considered herself bisexual. “It was so hard for her to understand,” she continued. “She didn’t want me to be judged and she didn’t want me to go to hell. But she believes in me more than she believes in any god. I just asked for her to accept me. And she has.” Still, Miley (jokingly) described her parents as “conservative-a– m—–f—ers.” And she said of Christian politicians, “Those people [shouldn’t] get to make our laws,” especially those who take Old Testament stories such as Noah’s Ark literally: “That’s f—ing insane. We’ve outgrown that fairy tale, like we’ve outgrown f—ing Santa and the tooth fairy.” [theguardian.com, 6/10/15; cpyu.org, 6/10/15]

The Cost of Our Silence: Full Introduction
The Johnson Amendment and the Agenda to Silence Christians

3 Responses to Miley Cyrus May Not Care, But We Should