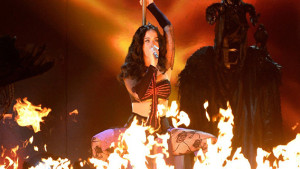 The Grammy’s seem to be following the lead of other entertainment industry awards shows that push the envelope of decency in a desperate attempt draw ratings. Sadly, the Grammy’s are no longer just about music – and if we care about soul pollution, we better start making better choices about what we allow in our homes.

Christian friends, if we don’t teach our children to believe in and follow Jesus Christ, the world will teach them not to. Hollywood makes no apology for its promotion of the perverse, and they no longer care about offending traditional Americans and mocking Christians.

Some have taken this point a step further, suggesting Hollywood is openly rebelling against God and Christianity. Before I sum up the lowlights from the 2014 Grammy’s, I’d like to share some friends’ comments:

You might argue that Hollywood awards shows are only giving America’s culture what it wants. I’d tend to agree. If you’re a believer, God has saved us in Christ, but too many believers have conformed to the world rather than be transformed by the renewing of our minds. We cannot protect our minds by filling them with trash.

The Bible teaches that friendship with the world is hatred toward God and, “Therefore whoever wishes to be a friend of the world makes himself an enemy of God.” (James 4:4)

I’m not suggesting everything was bad, but I did watch Grammy performance clips, read some articles, and can hardly believe this stuff was broadcast on prime time. There is nothing new under the sun. It just seems shocking to those of us who still remember and understand how America began and the fact this once great nation was founded on Judeo-Christian morals and principles.

For obvious reasons, contemporary Christian artist, Natalie Grant (nominated for two Grammy’s) decided not to stay for the whole program. Here’s what she Tweeted that night:

After getting hammered by certain media and critics the next day, Grant further stated:

I’ve had many people throughout my career ask why I never tried to go in to mainstream music and last night was a beautiful reminder that I love singing about Jesus and FOR Jesus… And I can say that with all sincerity. My last thought: “I am not ashamed of the gospel of Jesus for it is the power of God who brings salvation to ALL who believe.” Romans 1:16

Do you really think more people will remember the Grammy winners – or the circus side shows?

The Grammy’s opened with Beyoncé and hubby Jay Z as she gyrated to her song “Drunk in Love” while some of the explicit lyrics had to be bleeped out. (Here is Good Fight Ministries expose on Beyoncé’s satanic influence)

As advertised in the days leading up to the program, the Grammy’s featured a “marriage” ceremony boasting 33 couples, gay and straight, while Macklemore & Ryan Lewis performed their gospel-tinged, gay-marriage affirming “Same Love.”

The festivities were introduced and “officiated” by Queen Latifa, who – get this – had been legally deputized to marry the couples by Los Angeles County. “This is not a song for some of us but for all of us,” she said at the outset. Wanting to be part of history, Madonna sang a version of “Open Your Heart” as cameras panned down the line of couples embracing and celebrating.

“[The weddings] will be in our minds the ultimate statement of equality, that all couples are entitled to the same thing.”

Katy Perry (aka Illuminati Priestess) presented her offering, a witchcraft ceremony, to the show while singing, “Dark Horse” ending with her being burned at the stake. Her act included a Knights Templar cross emblazoned across her chest, a beast with Moloch horns, dark-robed dancers with devil horns protruding from their heads, a pole dance with a broom, and lots of fire.

Keep in mind, this all took place during prime time.

We cannot expect unbelievers to act like Christians nor should we judge them – they need God – but we can warn, inform, and encourage fellow believers to stay strong and avoid the garbage.

Finally, because of the media’s marketing of same-sex marriage and the fact that activist groups often attack people that oppose their agenda, we often think homosexuality is the worst sin in the world. It may be the most rapidly accepted sin in American culture, but have we been just as vocal about our opposition to abortion, adultery, sexual promiscuity, lying, profanity, drunkenness, the occult, and Satan worship?

The human heart is wicked and beyond cure. We’re all in need of a Savior and for those of us thankful enough to be forgiven and saved from eternal separation from God, we need to pray for the lost souls in Hollywood. If they don’t turn to Jesus, their rewards end in this life.

David Fiorazo is the author of ERADICATE: BLOTTING OUT GOD IN AMERICA

4 Responses to Grammy’s Sacrificed on Altar of Depravity