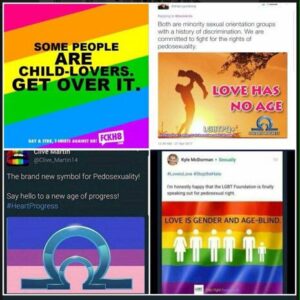 Over fifty years ago, American culture was being prepped for a new era of sexual behavior and expression. People began accepting things that used to be called “sins.” The increase of adultery and abortion came first, which helped set the stage for pornography, homosexuality, and transgenderism.

The immoral influence of Margaret Sanger, Alfred Kinsey, Hugh Heffner, and several others began infecting a formerly conservative, family-oriented, Christian nation. When moral anchors and norms are removed from culture, just about anything goes. Some say the next step is pedophilia. But they wouldn’t go that far…would they?

On June 28, 1969, New York police raided the Stonewall Inn, an underground venue for homosexuals, who responded with a violent riot. This event was one of the catalysts propelling the LGBTQ movement from the closet to America’s streets. Hoping to garner campaign support, Democrat Joe Biden visited the historic Inn just last week.

We can debate about how this nation was founded on Judeo-Christian principles and when the moral decline accelerated to the point we are no longer a godly, moral people as a whole. The fact is things that used to be talked about in whispers are now proudly proclaimed and celebrated.

With the ongoing efforts of Hollywood, media, government, public schools, and corporations, we are being bombarded by sexual ideas and images. In this open rebellion against the one true God, the left has effectively dumbed-down our values. So now, if marriage, morality, life in the womb, and gender no longer matter, why should age matter? ‘Love is love,’ they say. There is nothing new under the sun, and pedophilia has been around for thousands of years.

Overall, when it comes to sexual expression, public opinion has shifted dramatically in recent years. For example, new PEW Research reveals that just fifteen years ago (2004), the majority of Americans opposed same-sex marriage sixty (60%) percent to thirty one (31%) percent. Since that time, with the help of marketing efforts by the left along with the LGBTQ lobby, support is now at sixty-one (61%) percent – while those who oppose same-sex marriage are at thirty-one (31%) percent.

This is almost an exact reversal from opposition to approval, a complete 180 in public support of what used to be defined as sin or at least unnatural. Most Americans believed homosexuality was wrong. This kind of shift does not happen on its own. It takes effective (and relentless) effort.

Do not conform to the pattern of this world, but be transformed by the renewing of your mind. Then you will be able to test and approve what God’s will is—his good, pleasing and perfect will.

This brings up another problem. We do not expect the world (unbelievers) to live according to the Bible’s morality. We should however, expect those within the professing (claiming to be Christian) church to live and speak according to the truth in Scripture.

Tragically however, not only have Americans generally approved of LGBTQ people and lifestyles, many Christian denominations have now raised the white flag of surrender – as well the rainbow flag. It’s about being “welcoming,” they say.

These words rarely apply to Christianity anymore: equality, justice, affirming, diversity, inclusive, non-judgment, free speech, and of course, tolerance. Language has been hijacked to push an agenda and minimize sin. Double standards are already glaring, but will some of the same words be used to normalize pedophilia?

The Daily Wire’s Matt Walsh believes the left is doing just that. He makes a great point about the sudden acceptance of “drag queen story hours” and sadly, “drag kids” being raised by approving parents. These were not on anyone’s radar just ten years ago:

“Now both are utterly commonplace, yet leftists will insist even though grown men in dresses like to hang out with little children at libraries, and adults like to go to gay bars to watch boys dance around in skirts and high heels, there is nothing sexual about any of it. Ten years from now, or maybe sooner, they will admit that it is sexual but insist that there is nothing wrong with a young boy and a grown man getting together, so long as it is consensual. You do not need to be Nostradamus to see this next step. It is right in front of us, clear as day.”

When you consider the left’s cultural influence, our immorality comes as no surprise. By eradicating God from society, the result will inevitably be swift destruction.

In the PEW research, there is also quite a gap between people on opposite sides of the political aisle. Seventy five percent (75%) of Democrats are all-in for same-sex marriage compared to just thirty seven (37%) percent of Republicans. The Obama administration was instrumental in advancing the LGBTQ agenda as eight years of policies and legislation clearly prove.

But one of the saddest things today is the accommodation of “gay Christians” in many congregations as well as the infiltration of gay activists masquerading as ministers and pastors. Among denominations, the growing openness to homosexuality simply reveals a departure from the truth.

Please note I did not say ‘openness to homosexuals.’ We should be open to dialogue, loving and compassionate toward any and every sinner. Such were some of us (1 Cor. 6:11). I said “openness to homosexuality,” meaning the behavior or lifestyle being rationalized and justified. By not mentioning repentance, this apostasy leads to false teachings about justifying sin instead of the conviction of sin.

Pedophilia is simply the next logical step for some, in the regression of God-ordained, natural marriage and sexual intimacy. In fact, a new word was created to dilute the depravity of pedophilia. Ready? It is called, “pedosexual.”

Most people forget  the American Psychological Association (APA) removed homosexuality from the DSM-2 (The Diagnostic and Statistical Manual of Mental Disorders) in 1973 due to pressure from gay activists. Will they do the same with pedophilia some day?

The earliest Gay Pride parades included NAMBLA (North American Man-Boy Love Association) members who later were prevented from marching. For years there have been efforts to erase age of consent laws, a goal of the ‘gay’ platform since the 1970s.

Remember our report on the Catholic Church scandal involving decades of abuse as priests and top leaders molested young boys and girls? Approximately 85% of the victims were boys. Cardinal Raymond Burke, a member of the highest court at the Vatican even admitted, “We have a very grave problem of a homosexual culture in the church.”

Is it too late to change these trends? I’m not sure, but I would speculate that we cannot reverse this locomotive of immorality anytime soon. Please understand they’re going after our children. Education Advocate and homeschooling mom, Tina Hollenbeck recently stated:

“This is what we should have expected after 100+ years of government schooling/indoctrination. Those who set up the factory school system literally said in their writings that their goal was two-fold: to separate the hearts and minds of the children from their parents and to “free” children from the “shackles of religion.” The public schools have been wildly successful at meeting those goals and it’s not going to get better until Christian parents wake up, repent, and get their kids out of there…and then retrain themselves AND their kids in biblical thinking.”

I also believe the depravity we’re seeing today is a consequence of Christian silence. For decades, too many professing believers have taken the path of least resistance – or perhaps they’ve just been too busy and distracted. But if we love others, the true gospel must be preached!

Mission America’s Linda Harvey has warned for years that the Church and it’s leaders will have some explaining to do on Judgment Day. In an article, “What’s at Stake for Christians in the War over Homosexuality,” Harvey pleaded:

“Why did you spend little or no time in the pulpit dealing with this and all the related sexuality issues – promiscuity, pornography, adultery, fornication – sins that are tearing apart the families and personal lives of even Bible-confessing Christians? Why did you constantly decry ‘political involvement’ when this is a deeply moral issue, one for which there are ready arguments to be made in the public square had more Christian leaders been willing to make them?”

As for many on the left, they say they just want to “live and let live,” but we are no longer naive enough to think it stops there. Those who have created gods in their own image don’t want any other God, authority, or moral standard.

And if you are a follower of Jesus and believe the Bible is true, that makes you part of the problem. Christians are in their way. The left sees sexual perversion as liberating and the Christian faith as oppressive. But you cannot truly be free without the forgiveness and salvation offered through Jesus Christ.

Every human being was born with a conscience and knows right from wrong, and there is a holy God we will all answer to someday. Skeptical? Consider the evidence for the resurrection of Jesus Christ, and for those who are open minded, I hope you’ll look into the truth before it’s too late.

For the wrath of God is revealed from heaven against all ungodliness and unrighteousness of men who suppress the truth in unrighteousness, 19 because that which is known about God is evident within them; for God made it evident to them. 20 For since the creation of the world His invisible attributes, His eternal power and divine nature, have been clearly seen, being understood through what has been made, so that they are without excuse. 21 For even though they knew God, they did not honor Him as God or give thanks, but they became futile in their speculations, and their foolish heart was darkened. Romans 1:18-21

Get ‘Em While They’re Young

Abuse, Pedophilia in the Catholic Church?