By David Fiorazo on May 24, 2016 in David’s Blog, LGBTQ, Liberalism, Religious Freedom 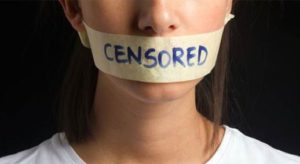 President George Washington once said, “If freedom of speech is taken away, then dumb and silent we may be led, like sheep to the slaughter.” Was this an exaggeration or are religious freedoms, particularly those protected under the First Amendment, that important?

Like many modern day corporations, especially those whose owners are under 35, Facebook has a liberal worldview. So it was not surprising when several former Facebook employees recently admitted its news curators routinely suppressed conservative news on the social media giant’s trending module.

Instead of allowing content many of us want to see, Facebook manipulated its news section to reflect the biases of its young workers, many of whom are hostile toward the Christian worldview. They blatantly abused their authority and power of influence to create or hijack a trending news topic to serve their liberal bias.

Where the Left has power, it will use that power to try to crush dissent, debate, and criticism. And it tries to smother conservative discussions entirely. As the Facebook insider tells Nunez, the curators deep-sixed discussions about Rand Paul, CPAC, and Scott Walker. Entertainingly, Facebook attempted to suppress discussion of Lois Lerner, the IRS executive who abused her powers to try to suppress conservative groups in the run-up to the 2012 elections. That’s a nice tag-team: The Obama administration tries to silence conservatives, and Facebook tries to silence conservatives’ complaints about being silenced.

This is not just about social media or even the blatantly biased “mainstream media” and cable news outlets. It is about the Left’s agenda to change culture and reshape morality.

The labels for the Left have become somewhat interchangeable. Why? Liberals, progressives, democratic socialists, and secular liberals all have a few things in common: their worldview is based on atheism, humanism, moral relativism, environmental extremism, and/or government-supported social justice. Truth is whatever they decide it to be and they continually redefine terms and make up new rules of engagement.

In an article, Absolutely No Absolutes in the New America, Tim Wildmon of the American Family Association stated:

These people, led politically by President Barack Obama and his administration, are basically at war with 1) traditional Americans, 2) the Judeo-Christian value system, 3) common sense, and 4) millennia of history.

Most of us know the recent gender and bathroom debate seemingly came out of nowhere and now more people are confused about sex, the basics of biology and science, history, and of course, truth.

But chaos, confusion, and moral relativism only propel godlessness further down the road of destruction. Am I being dramatic?

Canada’s Liberal Party, headed up by new Prime Minister Justin Trudeau, just introduced a brand new bill that would punish anyone who disagrees with gender identity or expression, classifying dissent as “hate speech.” This could land a practicing Christian in jail for two years.

At least we know exactly where he stands.

You may have also heard about New York Times writer, Nicholas Kristof, who recently admitted liberal intolerance is rampant, saying they practically demand people think like them. So much for diversity of thought. He said gatekeepers in academia and the media typically look down on those with different views. According to Kristof:

“We progressives believe in diversity, and we want women, blacks, Latinos, gays and Muslims at the table, so long as they aren’t conservatives.”

The majority of elite media, for example, are liberal with less than 7 percent admitting they are conservative. They have voted for or contributed to Democrat candidates in practically every single election. Kristof cites studies in his article showing an average of 8.5% of humanities professors and less than one in ten social-studies professors are conservative while about 20% identify as Marxists.

Though he believes evangelical Christians and conservatives deserve a fair shake, he is more concerned about the lack of quality in education today.

Add to this the propaganda permeating public schools today, it is easy to understand how Christian morality is squelched while anti-Christian views are promoted throughout society. So, speak up about the new transgender debate and you may be called “transphobic.”

During a time when young children and confused youth are questioning what they hear in culture or see via Hollywood, the truth is being censored. Why? Because the Left doesn’t want to acknowledge there is a God who created them and loves them, but will also judge them one day for their rebellious lives unless they repent of their sins and turn to Him by faith.

Without the foundation of the absolute authority of God’s Word, America is adrift in a sea of moral relativism where man makes the rules and determines ‘truth.’ What people need is not accommodation of a sinful lifestyle. They need the gospel of Jesus Christ. They need to become a new creation.

The greater issue goes beyond common sense, free speech, and battles over bathrooms and the public square; it involves questions about human life, the existence of God, and eternity as well as the value and purpose of every life.

Most of us are encountering brand new discussions related to sex and gender. Are we ready to have these important conversations, and prepared to respond with biblical, compassionate answers to those who are truly searching? As important as it is to stand up for truth and religious freedom; as important as it is  to ensure the safety of all women and young children regarding public restrooms and locker rooms, we must first seek to meet their more pressing spiritual need.

And while we look for opportunities to share the gospel of Jesus Christ and confront sin, we can expect increasing attempts to keep us quiet – or at least keep us behind church walls.

Whoever would overthrow the liberty of a nation must begin by subduing the freeness of speech. Benjamin Franklin

The Dawn of Totalitolerance – Robert Knight

The Johnson Amendment and Agenda to Silence Christians

Tell the Truth About Transvestites, Go to Prison

What’s Happening To Our Heritage?
Redefining What it Means to Be Human